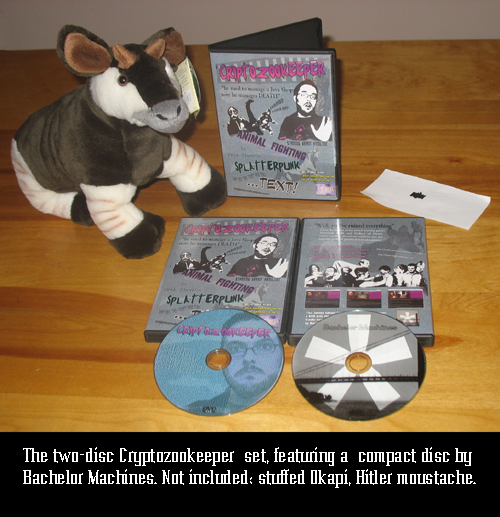 UPDATE: Exciting news! We are proud to announce that Mantissa Ltd. is bringing Cryptozookeeper to the Google Play Store!

You have found a cryptozoology game! Cryptozookeeper is a character-driven graphical text adventure. Features include over 60 cryptids to create and train, over 200 characters to find total, over 12 hours of gameplay and a soundtrack of over 60 songs. I created Cryptozookeeper between 2006 and 2011. I wanted to make a full-length graphical adventure game that had funny characters in off-beat situations, all within an alternate future. The central premise of the game is that you play a guy named Vest that discovers machinery that allows him to build cryptids from the DNA of normal animals. Sprinkle in some unwilling accomplices, a grim and gritty city to explore and some fun dialogue and you’ve got an idea what’s in store for you.

Cryptozookeeper also attempts an “episodic” take on adventure games. I wanted to make the game seem like the best season of television you’ve ever played.

Article at The Retroist

There are a couple reviews of the game posted to the Interactive Fiction Database at tads.org.

The DVD set is no longer available, but here is what it contained:

* 2-Disc set in a dual amray package.
* Disc One is a DVD featuring the game and extras.
* Disc Two is a music compact disc featuring new and in-game music by Bachelor Machines.
* From Robb Sherwin, creator of the XYZZY-winning games Fallacy of Dawn and Necrotic Drift.
* DVD includes a Kindle-formatted foreword by Alex Gray and game prologue story by Robb Sherwin. (HTML-formatting also included.)
* DVD also includes the game’s source code, a file with all the game’s art assets and interpreters for Windows, Linux and OS-X.
* DVD also includes the actual game, natch. Looking for reviews? See further down the page.

The complete list of winners is here at xyzzyawards.org.

TECHNICAL HELP: Sometimes the graphics can look incorrect when playing, especially if you’ve used Hugo to play other games before. To make the graphics look right in Cryptozookeeper, pick a Fixed Width font size of 8. To do that, do the following in your interpreter: Options (or Edit)->Fonts->Fixed Width-> and then any font, with a size of 8. The spacing on the top windows will then be good.

(The Fixed Width font will only affect the top status line text — in other words, this doesn’t force you to play the entire game with a small font size.)

If you have other questions getting the game to run, please write me at beaver@zombieworld.com. 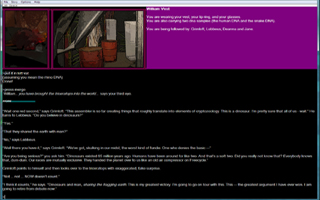 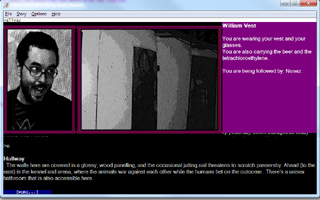 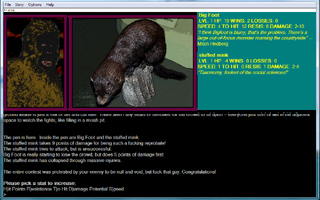 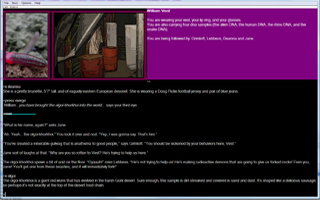 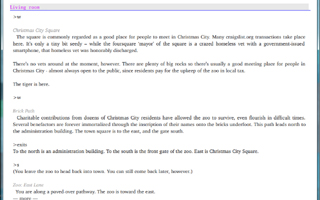 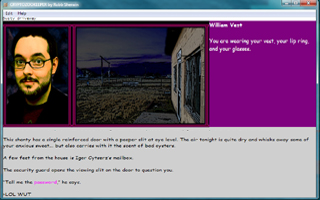 I’ve done two interviews about the game, at FWONK and Gnome’s Lair.

Cryptozookeeper made an appearance at the 2011 Oklahoma Video Game Expo in Tulsa. Oklahoma is a fine state for cryptozoology. I got a table with fellow text game author Rob O’Hara and we had many text adventures on display for the show. More info here.

I did an interview with Jason Dyer back in 2008, when I was still working on the game, which you can read here.

Greetz to the music label FWONK and the Internet Archive.

Cryptozookeeper is released via the Creative Commons 3.0 Attribution-Noncommercial-No Derivative Works 3.0 Unported license. Special thanks to Big Foot, the Loch Ness Monster, the fur-bearing trout, the talking dog and the Mongolian Death Worm.