This thread is to remind me to post a picture or something of the high score save kit I installed.
the dark and gritty...Ice Cream Jonsey!
Top

Mr. Do! did not survive the encounter that led to Frobozz's death. The monitor just shows a white screen regardless if the board is plugged in or not. I think I have an extra board around. The circuit board on the neck MIGHT be cracked a little, I dunno.
the dark and gritty...Ice Cream Jonsey!
Top

So the rescue dog killed your cat AND your Mr. Do! ?

Oh man, now I'm back on the Jiz shotgun side of the aisle.

THE
NEVER GET A USED DOG
AARDVARK
Top

Ice Cream Jonsey wrote: ↑Sun Feb 17, 2019 12:17 pm Mr. Do! did not survive the encounter that led to Frobozz's death. The monitor just shows a white screen regardless if the board is plugged in or not. I think I have an extra board around. The circuit board on the neck MIGHT be cracked a little, I dunno.

Does it "play blind" when the PCB is plugged in? Like can you coin up and hear game sounds? If so, then you could just have a loose video wire connection to your monitor chassis.
(╯°□°）╯︵ ┻━┻
Top

It does not, sir! I have two Mr. Do! boards. (I would have had three except a fat asshole named Wayne made off with my shit.)

So, nothing happens when I swap boards. My next step is to see if any electricity is getting to the board itself and then start tracing backwards from there. I just don't want to do it at the moment, but that's next.
the dark and gritty...Ice Cream Jonsey!
Top

So, nothing happens when I swap boards. My next step is to see if any electricity is getting to the board itself and then start tracing backwards from there. I just don't want to do it at the moment, but that's next.

Hm yeah sounds like perhaps your power supply is going out. At least that's a cheap part to replace assuming you can use a Happ switching PSU.
(╯°□°）╯︵ ┻━┻
Top

Ha, that is a great point - I suppose I should ensure that power is actually getting to the board. Oof.
the dark and gritty...Ice Cream Jonsey!
Top 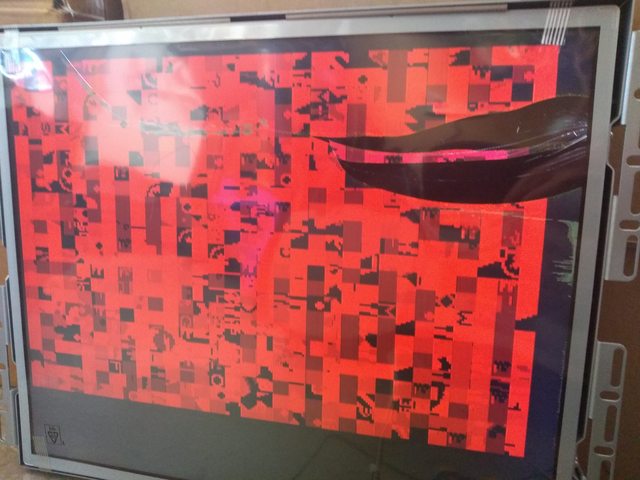 I'm getting that pattern when I start it up. I plugged the board into a different Mr. Do! machine and it is fine. I'm reading off the voltages and they seem fine - the 12+ line is low, but by half a volt. People are telling me it doesn't matter.
the dark and gritty...Ice Cream Jonsey!
Top

Tried to work on it last night and a frustration of mine comes up - the (new) power supply hooked into the machine didn't work. It was working two nights ago when I stopped. It drives me crazy. I know enough about electricity where I know how things should work. Then I get shit like "no power is getting to the power supply."

The supply has three wires (green, white and black). When I take a measurement across the hot and neutral wire I don't see anything. The power strip works because I have other things connected with it. So what the fuck - somehow the CORD is broken? Are you kidding me?

... is a great video that once and for all explains what is going on with the three wires.

I mean, it's impossible that the cord is bad. I have it right, don't I? If I have a three prong cord and I take a measurement with a multimeter at the hot and neutral wire, I should see 120 volts, right?
the dark and gritty...Ice Cream Jonsey!
Top

Confirmed that the power supply blew a fuse. So that will get fixed.

So I am going to try to take some pictures of what it looks like inside. It's a goddamn mess. I need something physical instead of virtual to occupy myself, so I am leaning towards a pseudo-restore. It'll have an LCD monitor and I am not going to bother finding the right control panel (the one it has is for Bomb Jack, which is fine, and Bomb Jack has two buttons, which is fine for what I am going to do with it).

I'm not going to wire it for Universal games, but instead get a nice JAMMA harness and a JAMMA to Mr. Do! adapter. So it will only run Mr. Do!, but it will have the ability to run JAMMA boards if need be. (I'll wire the second button.)

It needs a lot of work. Off the top of my head:

- All the wires removed. They are hacked to hell.
- The isolation transformer can come out. Since I'll have an LCD monitor, I will just run everything to a power strip and then have the power strip go to the wall.
- It's got Mr. Do! art on it but the sides are scratched to hell. So I'd want to get this - https://www.gameongrafix.com/product/mr-do-sideart-1/
- I think it has a circuit board to drive the sound to the speakers. I'd love to bypass it, but I'll make notes to see if I can.
- I'd love to also mask off the stencils on the side and give it a fresh coat of white paint elsewhere. I dunno. Stencils are expensive.
- It needs a back door
- The very top of the game has a panel that is gone. I think it allows access to the light. I'd kind of like to have small LED buttons there instead. And run power for it down to the power strip.
- It has no bezel, so that would be nice, especially if I can do something that shows how to play Mr. Do!, which I think I have seen out there.
- It would be nice to have it on some of the casters that Melissa bought for me like 8 years ago. I have a bag filled with them. Granted, you need four at a time, but still.

We're going to ignore what this costs because that's not the point. And at least I do not have to buy the board or the high score save kit. I've got those two things and the monitor and the metal mount for the monitor. I think I have a JAMMA cable but it might be shit, on the other hand, how bad can it be. I would also like to use molex connectors instead of those twisty wire knobs or just wires held together with electrical tape.

(Also might make my own side art design with this - https://gamicus.gamepedia.com/Mr._Do - instead of the standard Universal one, like I did with Polybius.)
the dark and gritty...Ice Cream Jonsey!
Top

All of this sounds promising! Parts prices really have not been too bad to me over the past couple years, it's just complete cabs and rare boards that get insane. Totally agree with you on converting to JAMMA as well at this point. If the wiring is all janky anyway, fuggit.

Also, if you really do not think you will ever put a real CRT monitor in that cabinet and intend on removing and tossing the isolation transformer, and it isn't starting to split apart; I would like to have it for my test bench. I'll pay shipping of course, those things are small but heavy.
(╯°□°）╯︵ ┻━┻
Top 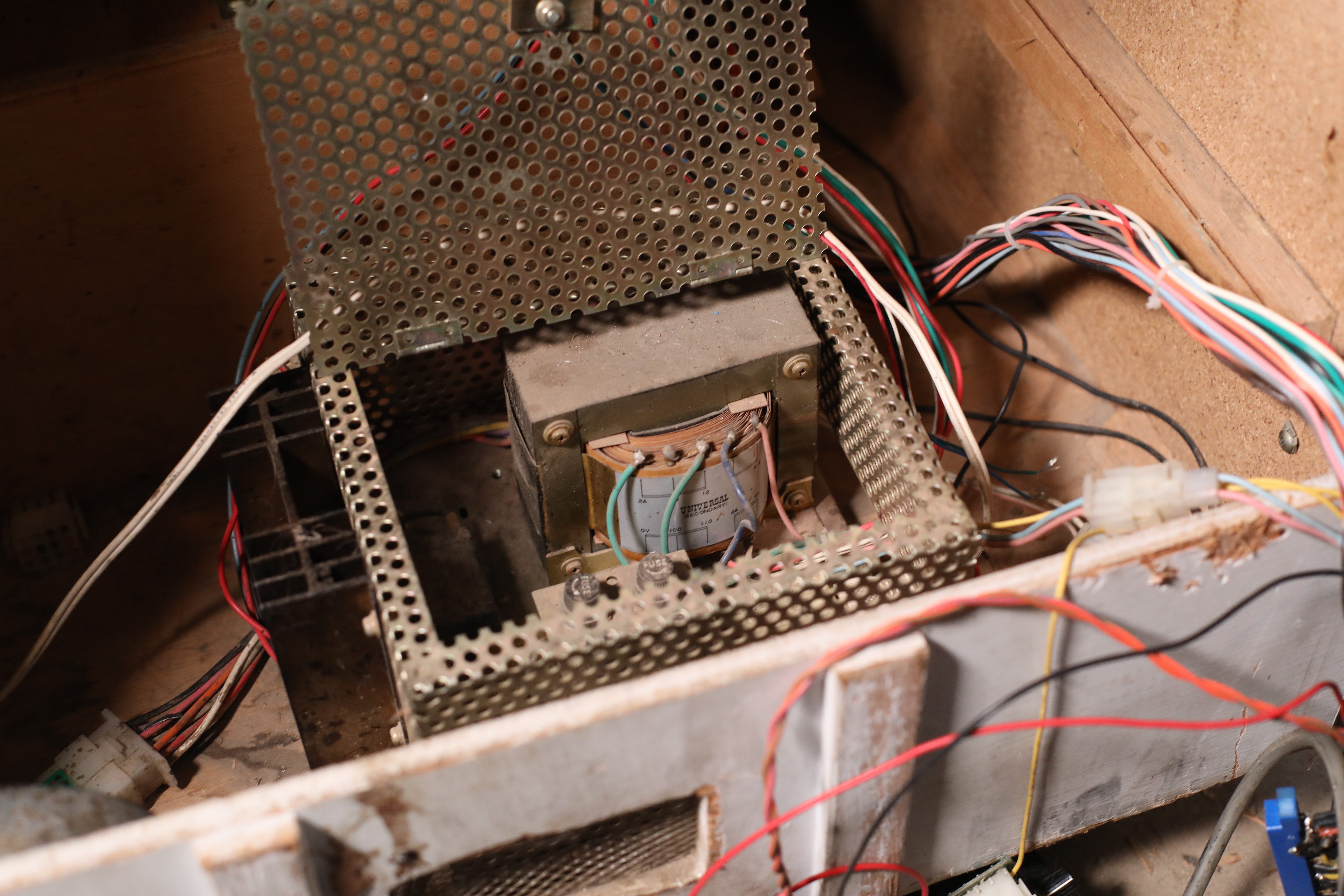 Not sure what this is, but it is going into the isolation transformer: 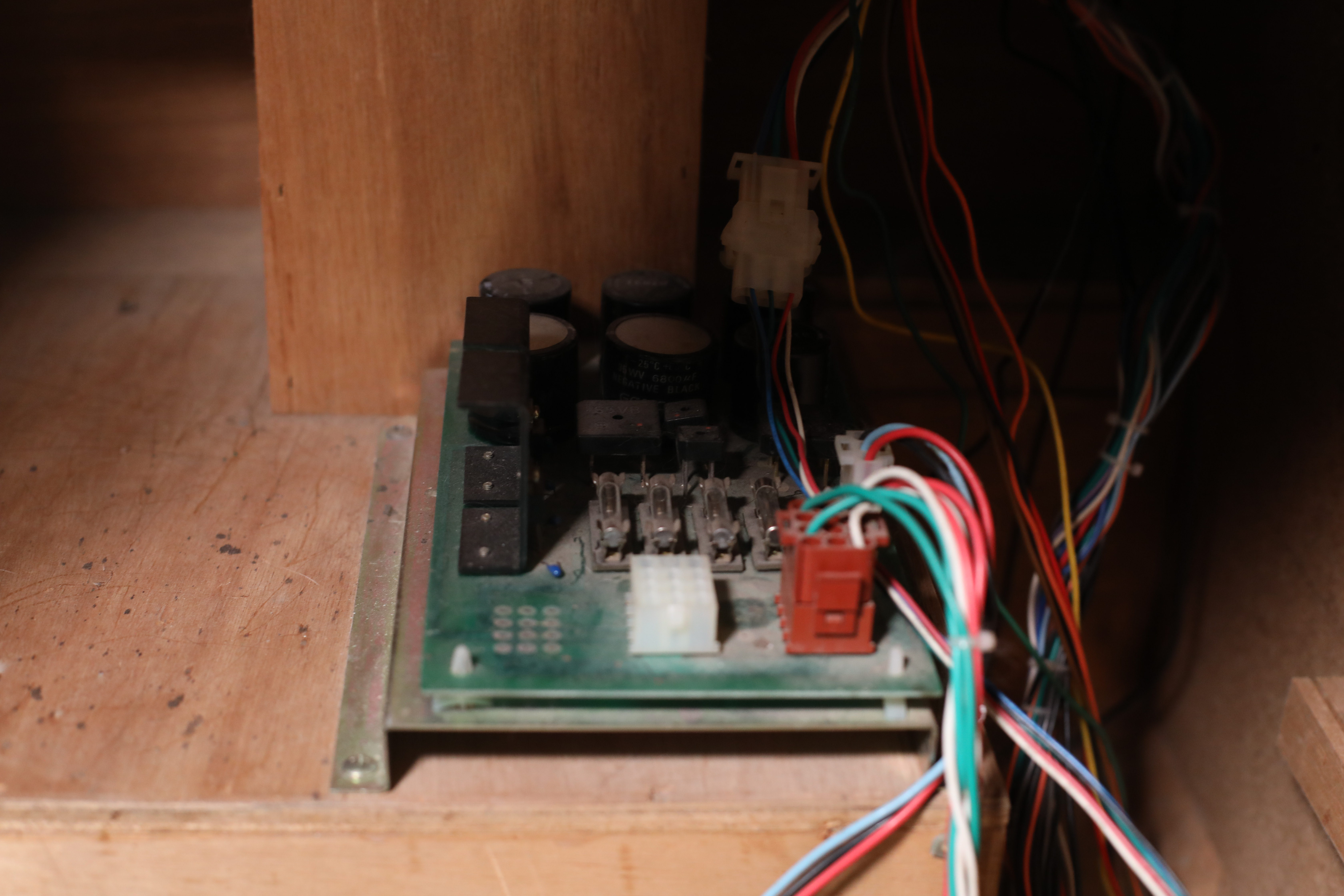 This allows me to control the volume, if I can re-use it, I will. 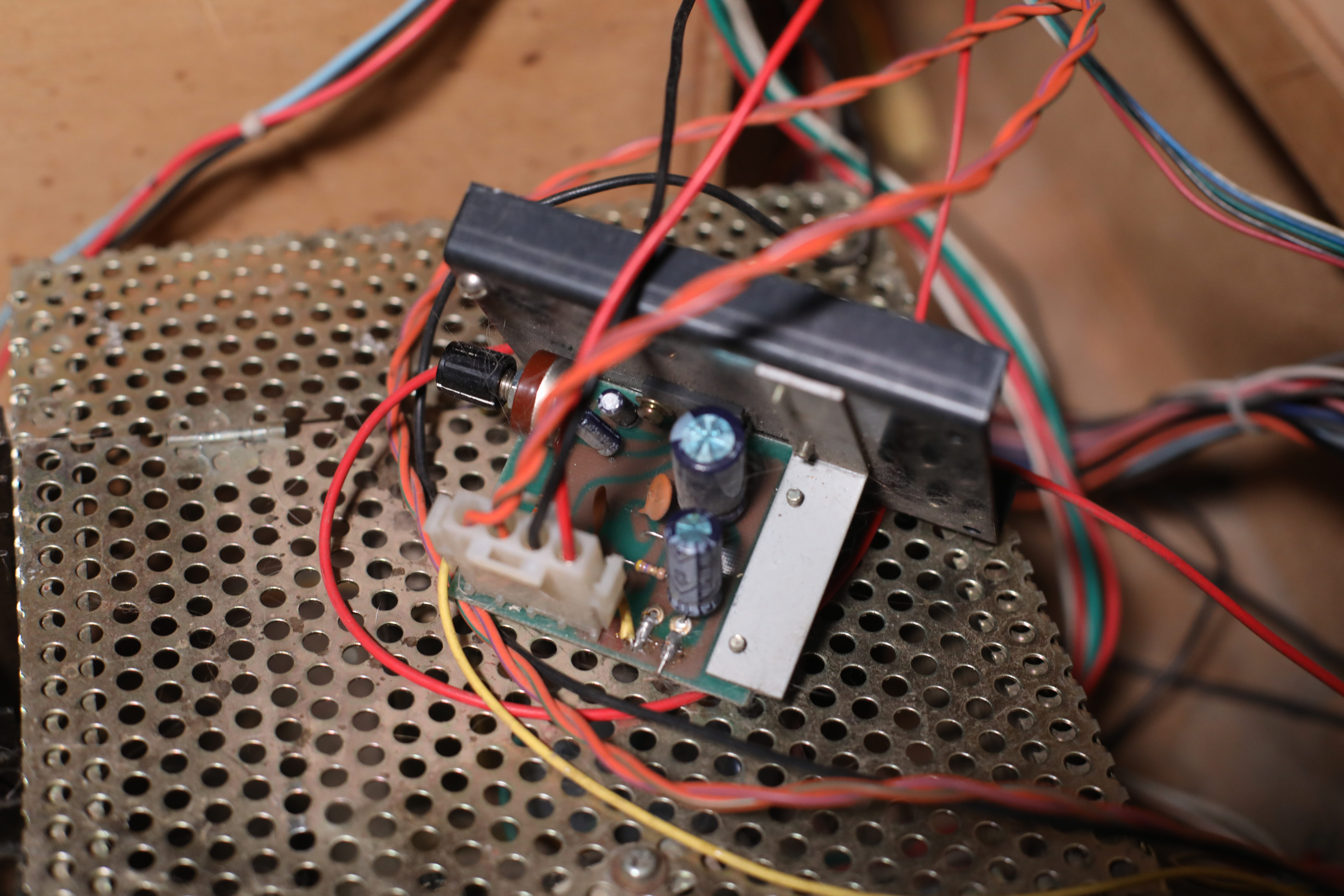 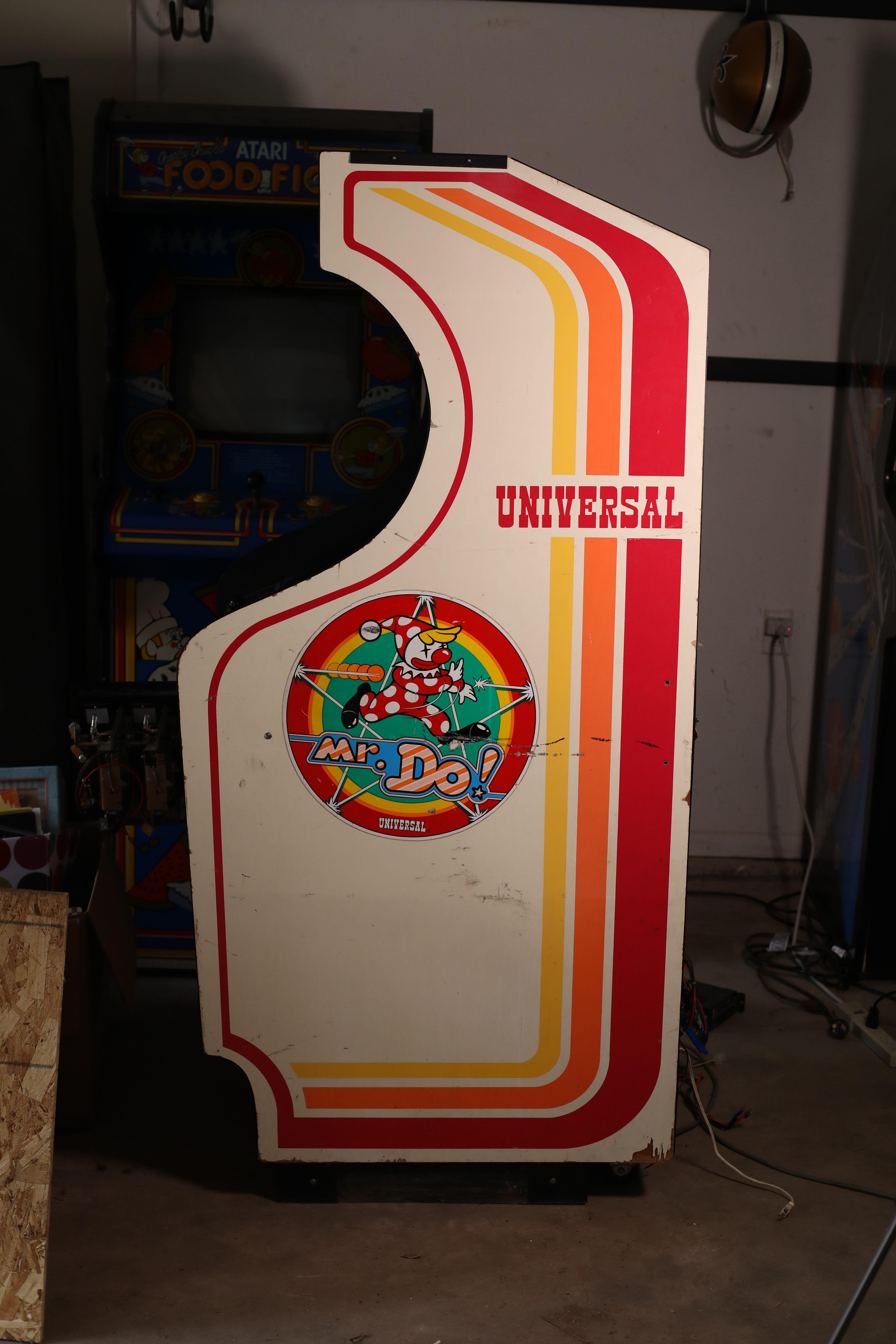 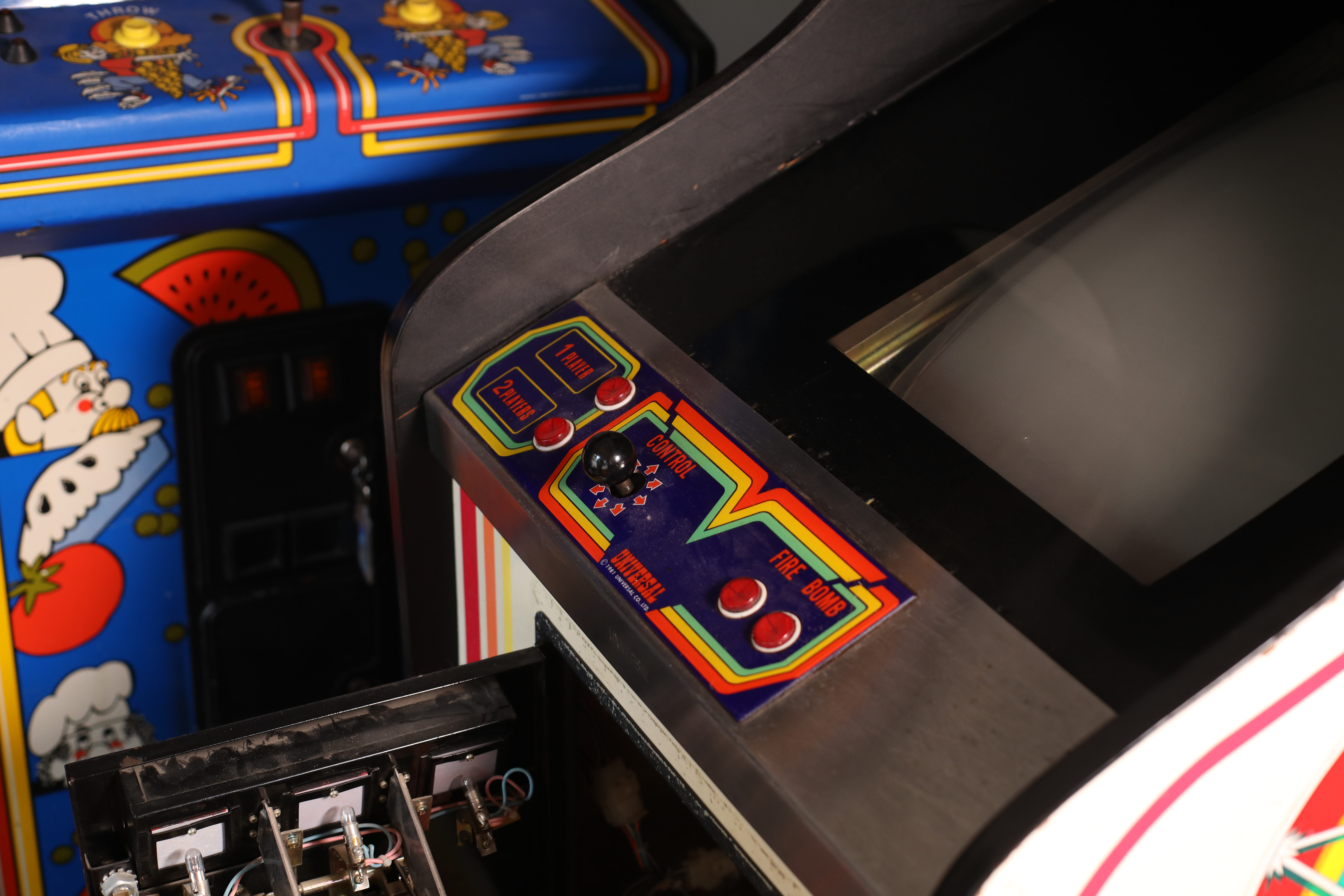 I never noticed that Mr. do looks like the 2112 album cover.

PS: dont ever stick your tongue on those electrical thingies.

Who the fuck did the drywall in that place? Jesus Christ!!
"Jack Flack always escapes." -Davey Osborne
Top

I have the isolation transformer out and whatever that board is that I didn't know what it was. I also saw a mouse out of the corner of my eye dive into a crack against the wall, so that's great.
the dark and gritty...Ice Cream Jonsey!
Top

the board you don't know is a voltage regulator/rectifier kinda thingy.
Top

Thanks, man - Jizzers, do you need/want that board, too?
the dark and gritty...Ice Cream Jonsey!
Top

Thanks, man - Jizzers, do you need/want that board, too?

Nope! Just the big brick of copper (iso transformer) heh No rush at all of course! I'd just rather put it to use than see it junked.

Your side art looks nice. Are you looking for a Mr. Do control panel or do you like the Bomb Jack better? Having at least 2 firing buttons is always nice when you throw other boards in it.
(╯°□°）╯︵ ┻━┻
Top
Post Reply
36 posts