When You Take Politics Out of It, GWB Is Pretty Cool

When You Take Politics Out of It, GWB Is Pretty Cool Ha haha ha!! That's OUR President! Some reject from The Tick apparently decided to crash the press conference! The LIEberals have been trying for years to get in a shot like that -not so easy, is it, Jackass? Bush's reflexes are LIGHTNING QUICK! I'm gonna make a list of Presidents that wouldn't have gotten out of the way of that thing in a sec.

Here is a quick guide of my opinion of George W. Bush, throughout his Presidency:

And that goddamn smirk on his face after the first shoe goes by, oh man. I heard that the reporter that did that was from Egypt? So it wasn't even a real Iraqi that was expressing his disappointment with George? Man, if that's true, then fuck Egypt: I'm sure we could figure out a way to transport the Sphinx to South Dakota, and give people two rock-based carving reasons to visit.

Anyway, I am positive that Bush's approval rating will go up a few points next time they check, he may even crack 30. At least for this moment in time, I do officially approve of the job he is doing.
the dark and gritty...Ice Cream Jonsey!
Top

Okay, I made the list of what other Presidents would have done, and just posted it as an update on the main site. It should show up four hours from now, so enjoy that with breakfast!
the dark and gritty...Ice Cream Jonsey!
Top

Lol - I think the Sphinx should go to Vegas and replace that cheesy fake one. And we [the people of the U.S.] also get to keep whatever secrets or treasures are contained in that hidden chamber buried under it's paws. I bet if it was Obama he would have caught the shoe and ran for a touchdown or maybe slam dunk it in the nearest trashcan.
Which of you is interested in my fine wares?
Top

I like that bush's answer later was to belittle the size of the guy's feet (and therefore penis): â€˜if you want the facts, itâ€™s a size ten shoe that he threwâ€™
Top

This is the first time I have heard him speak since two weeks before the election. It takes something like this to bring teh news. Sad, really.

I wonder how many other people got that. You fucking cock.
Top

Sorry about that. You know I wish the Bills would win a Super Bowl, right? You are aware of that fact??
the dark and gritty...Ice Cream Jonsey!
Top

I wonder how many other people got that. You fucking cock.

I didn't get that, but I did assume it was funny.
Top

I wonder how many other people got that. You fucking cock.

I didn't get that, but I did assume it was funny.

I assumed McKinley would be: shoe hits him in the gut. He dies 8 days later.

Taft would have been: Dude, there's no fucking way anyone could miss Taft.

I thought Norwood's jersey number was 25 or something.

THE
THATS ALL HE'S KNOWN FOR
AARDVARK
Top

I can only refer you to:

Yeah, well. BUGS GOT IT!!!
the dark and gritty...Ice Cream Jonsey!
Top

AArdvark wrote:I thought Norwood's jersey number was 25 or something.

THE
THATS ALL HE'S KNOWN FOR
AARDVARK

That made me chuckle, kickers cant wear 25.
Tangent
Kickers of the modern era can only wear numbers 1-19. Back in the old days you had running bucks wearing numbers like 76 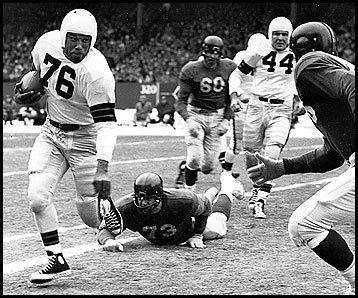 and then there is this guy

and rest in peace Sammy Baugh, the best Quarterback/punter who wore 33 that ever lived , a number modern day quatrerbacks and punters arent allowed to wear.

the last group complained, quite tellingly They said, "Why don't you have a spoon that just says 'Earth?' It would save time
Top

Hey, I watched a HALF of a football game last Sunday. The Bills were playing...some team and they won.


I didn't know there were jersey number ranges for different positions. I always assumed that everyone got to pick a favorite based on seniority or something.
Top

Knuckles the CLown wrote:Back in the old days you had running bucks wearing numbers like 76

Hey, that wasn't me.

How'd this go from Bush getting shooed to racist footballers?

I'd like to see Woody Wilson duck out of the way if someone threw footwear at him.

AArdvark wrote:Hey, that wasn't me.

I still can't believe Bush ducked the first one. Seriously, it amazes me every time I see it. That thing would have hit me in the face and exploded, STILL AS A SHOE.
the dark and gritty...Ice Cream Jonsey!
Top

Calvin Coolidge would have let the shoes hit him and said nothing.

Teddy Roosevelt would have drawn his game rifle from under the podium and blasted the shoes before they traveled a dozen yards, then he would have joked about it.