Flack mentioned that he played this game on his show last night and said that the SNES and Amiga were his favorite versions. So I threw the .ADF file over to the MiSTer. "Hmm, wonder if it will have a crack screen," I said, and, welp, here it is: 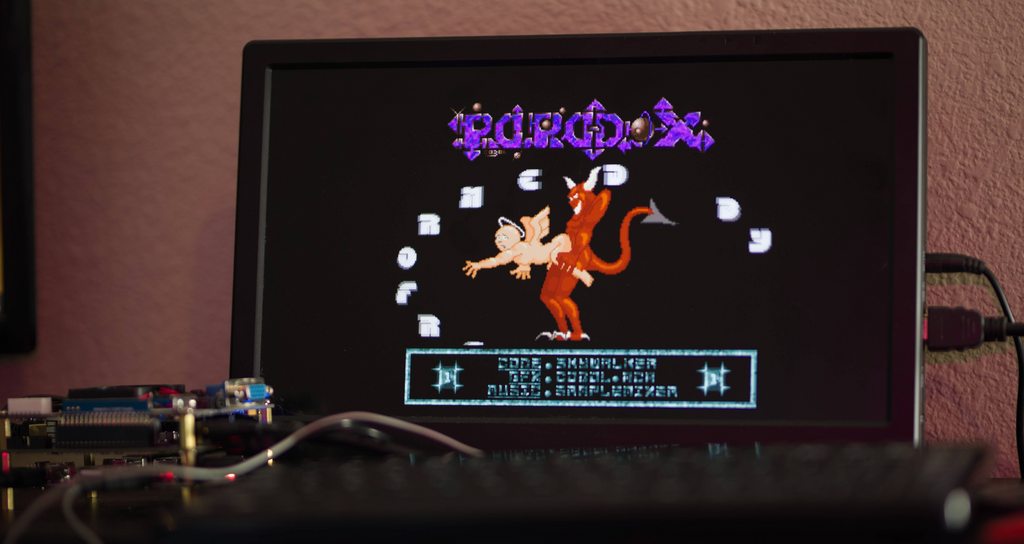 Q: Was there animation when the devil was fucking that angel baby?
A: Y E S
the dark and gritty...Ice Cream Jonsey!
Top

Did the little angel spit up odd body fluids at the end?

Wait, I mean, was the game any good?

The game looks gorgeous on the Amiga, but the Amiga hardware used joysticks with just one button. Super Off Road requires a simple button for Nitro, but also requires an analog button (in the form of a pedal) and since the Amiga used the Atari 2600 style joystick it doesn't have it - the choice they made was to have the player push the joystick forward to accelerate which is a little awkward. :(

(DOS had two buttons available. Digital, sure, but you can't have everything. Not looking like such a TOUGH GUY now, are ya, Amigas????????)
the dark and gritty...Ice Cream Jonsey!
Top

That's just the game devs fucking it up. Two buttons work just fine on Amiga (including the A500.) The Turrican games for example support them. But since 90% of Amiga owners only had the cheaper 1-button joysticks, or "fake 2-button" joysticks that simply had the same button twice, most Amiga devs simply went with the lowest common denominator case, which is 1 button.
Top

I never knew it supported two! Damn, thanks!

Right I mean.. otherwise I'd be forced to hit up to jump in Shadow of the Beast because I already need one button to attack.

There's also some 4-button games, but I think that's limited to AGA Amigas (like the A1200.) There's also the CD32 gamepad with lots of buttons, but even less games support that it seems.

This is why I prefer emulation for Amiga games that only use UP for jumping. I just map UP to a controller button in the emulator :P
Top

Not only did the developers of Super Off Road map up/down on the joystick to the throttle controls, but they also made the throttle "stick," like cruise control. In other words, if you push the accelerator all the way up to 100% and then let off, it stays at 100%, instead of decreasing as if you had taken your foot off the gas. So instead of pushing forward for more gas and letting go of the stick to decrease, your truck will be stuck at full throttle even if you smash into walls, obstacles, or other trucks.

One interesting thing I mentioned during my podcast was that the game was developed by the Leland Corporation. Leland was essentially Cinematronics, the company behind Dragon's Lair and Space Ace. They were acquired by Tradewest and rebranded the Leland Corportation after one of TW's owners.

This link should jump to the C64 version playing. I played it for a while before switching to the SNES version for comparison.