Psycho Goreman opens as siblings Mimi (10) and Luke (13) discover a small gem buried in their backyard. The Gigaxian Gem not only awakens the Archduke of Nightmares, but also grants the owner of the gem complete control over the demon. We quickly learn the Duke's penchant for inflicting suffering as he turns a would-be mugger into some sort of quivering human slot machine doomed to suffer ultimate pain for all eternity, but once Mimi learns she can control the Archduke, she makes him sit in a warehouse, watch television, and play games with her and her brother. She also gives him a new name: Psycho Goreman, or PG for short.

Before long, beings across the universe are alerted to PG's presence. First is a group of Psycho Goreman's old henchmen, who rather enjoy not being under his control and turn on him in violent fashion. Psycho Goreman's bigger problem is Pandora, a robotic angel who travels to earth in order to stop PG from destroying all the light in the universe.

All the effects in Psycho Goreman are practical. PG, Pandora, and all the other monsters are people in latex suits, which gives the movie a Power Ranger-esque feel. It would be easy to mistake this for a kid's movie until the violence gets out of hand. There's more than one beheading, blood flows like water, and there's even a police officer who, after Psycho Goreman sucks out his sole, walks around like a zombie continually shooting himself in the head in an attempt to end his own eternal damnation. The combination is an odd one; it's like E.T. with R-rated violence. It's a kid's movie not for kids.

By the end of the film, Psycho Goreman, Pandora, the kids and their passive-aggressive combative parents decide to bet the outcome of the universe on a game of Crazyball, a game Mimi and Luke made up. The final showdown between Psycho Goreman and Pandora is the most Troma thing I've ever seen not in a Troma movie. There's no doubt the writer/director of this film grew up on Toxic Avenger and other Troma classics.

If you think an over-the-top violent episode the Power Rangers sounds like a good time, or think the idea of a young girl turning her friend into a giant brain and leaving him that way sounds funny, Psycho Goreman might be for you. Now playing on Shudder. 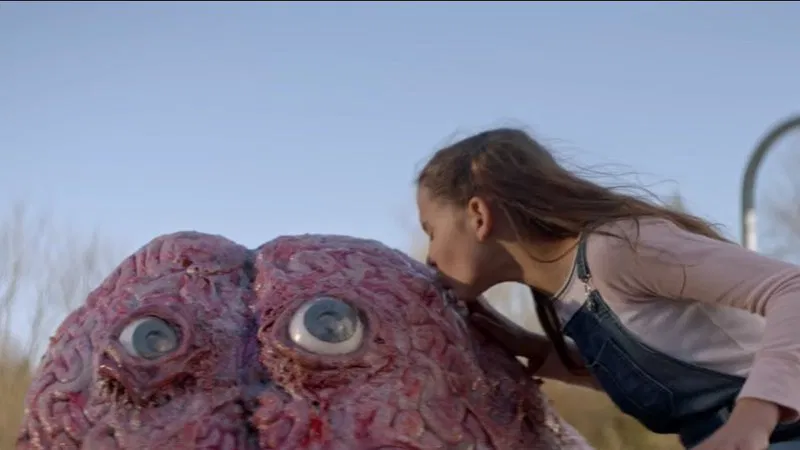