Just saw 80 percent of this over the weekend. There was conversation going on in the room so I didn't catch much of the dialog but I got the jist of it. Not bad

I think it's the only Steve Buscemi movie I've ever seen where he didn't die.


THE
THREE OUT OF FIVE
MR. PINKS
AARDVARK
Top

I'm going to have to insist you rewatch this one with the volume on. The dialog is arguably the best part of Reservoir Dogs. That, and the music.
"Jack Flack always escapes." -Davey Osborne
Top

Everybody shoots each other at the end.

Steve Buscemi almost certainly dies, but it's off-camera and so still up for debate.
Above all else... We shall go on... And continue!
Top

I gather then you never saw: Armageddon, Con Air, or Pulp Fiction. He's in all of those and doesn't die.
"With great power, comes great… electricity bill."
Top

I gather then you never saw: Armageddon, Con Air, or Pulp Fiction. He's in all of those and doesn't die. 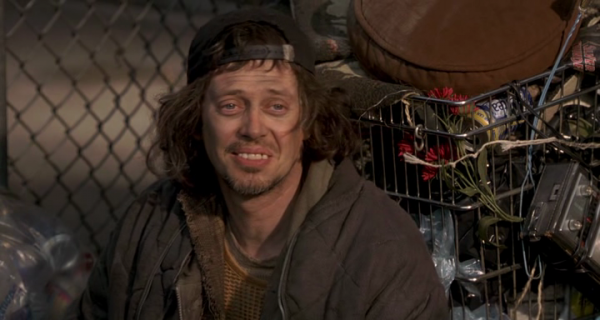 Never saw any of those movies. Wait, I did see fifteen minutes of Armageddon, the part where Bruce Willis tells Buscemi to back the drill out slowly. I didn't know he was in Pulp Fiction, was he the Gimp in the box?

AArdvark wrote: ↑
Thu Sep 12, 2019 2:57 pm
Never saw any of those movies. Wait, I did see fifteen minutes of Armageddon, the part where Bruce Willis tells Buscemi to back the drill out slowly. I didn't know he was in Pulp Fiction, was he the Gimp in the box?

The waiter at Jack Rabbit Slim's who served Travolta his $5 milkshake.
Above all else... We shall go on... And continue!
Top

pinback wrote: ↑
Thu Sep 12, 2019 7:14 pm
Never saw any of those movies. Wait, I did see fifteen minutes of Armageddon, the part where Bruce Willis tells Buscemi to back the drill out slowly. I didn't know he was in Pulp Fiction, was he the Gimp in the box?

Bruce Willis kills The Gimp in Pulp Fiction so it can't be him.

I had the impression it was Mia Wallace who ordered the "$5 shake" and Vincent ordered something else. Otherwise, why would Vincent have to try Mia's shake to understand why they charged $5 for it? (The atmosphere of the place and theme, the cost to provide that is in the food. Otherwise there'd have to be a cover charge just to get in the place, which does not make sense in the case of a restaurant.) Somebody has to pay the cost of the trophy given out in the dance contest, so unless there's an entry fee that wasn't mentioned, again, the cost of that trophy has to be factored in to the price of the food.

I'm also not sure why Vincent even cares what the food costs. His boss Marcellis.Wallace told him to take his boss' wife out and show her a good time. Winston Wolf mentions to Jimmy that Marcellus is "a millionaire." Presumably, Marcellus would pay Vincent what he paid for the food, and possibly for the time he spent taking her out, just as he'd pay him for any other job he does for Marcellus. So as Ronnie Cox said in RoboCop, "who cares what it costs!"

I mean, Vincent drives (what was probably) an expensive antique car and has enough money to buy recreational heroin, and lives in Los Angeles County, which can be an expensive place to live. I'm sure working for Marcellus Wallis is a fairly good-paying job. I'm guessing as a hit man and collector he makes (then) high five to low six figures.
"With great power, comes great… electricity bill."
Top

You're gonna wanna watch it again with the sound up buddy! That is its RAISEN DETRE
the dark and gritty...Ice Cream Jonsey!
Top

I'm probably not going to visit the movie again. The only reason I was watching it in the first place was because we were visiting extended family and someone else put it on as a way to be sociable.

You were not watching it. You are banned from saying you "watched a movie" when you barely paid attention, didn't see the whole thing, and/or didn't have the sound on.

This is ridiculous.
Above all else... We shall go on... And continue!
Top

I demand Vark re-watch Reservoir Dogs. The entire point is those dangerous, violent idiots talking to each other! Everyone screws up! Comeon, Vark!
the dark and gritty...Ice Cream Jonsey!
Top

No, I'm pretty sure it's raisin!

Even Tdarcos has seen Reservoir Dogs and he loves it! Come on Vark! Get with the program!
the dark and gritty...Ice Cream Jonsey!
Top

How about if I just read the Wikipedia article?
Top

No!! You gotta watch it again. Not today. Not tomorrow. Not even this year.

But Movie Night with Aardvark and Reservoir Dogs needs to happen. You'll enjoy it. Don't you want to enjoy things?
the dark and gritty...Ice Cream Jonsey!
Top

Can't I just watch Bugsy Malone and call it good? That's a gangster movie. And it's got Scott Baio in it.
I was kinda partial to Steelers Wheel and Jerry Rafferty. Now every time I hear Stuck In The Middle With You all I can see is the guy's ear getting cut off.
Nobody wants that image in their head when a cool song gets up on a playlist.
Bad enough the Pina Coloda song got ruined for me by over analysis here, now there's mutililation involved. (Shudders)

There's ... guys getting their ears cut off?

Not sure what movie that is. We're asking you to watch Reservoir Dogs, not some Faces of Death tape. I don't remember anyone specifically saying that an ear got cut off when I had it going in a the 8th tab on Netflix, far from being the current window, audio-only. A guy got his ear cut off? I remember a lot of screaming, but people were screaming at each other for most of the movie.

Is this the filth we're asking you to watch? An Ear Movie?
the dark and gritty...Ice Cream Jonsey!
Top

First he drinks a Slurpee then he cuts a guy's ear off.