As a guess I would say that they are for the NO and NC contacts. Normally open and normally closed. Multimeter at this point is good.

Hey, what's the best way to drill a bunch of 1 & 1/8th holes into a plank of wood? As I have the wood and the buttons, just not the holes in the wood.

Here is a layout of how the control panel is essentially going to look like:

Hey, what's the best way to drill a bunch of 1 & 1/8th holes into a plank of wood? As I have the wood and the buttons, just not the holes in the wood.

The answer is "get a hole saw." I now have that and an adapter for my drill.

Unless I get into a terrible accident on the way home, I think I can lay down the buttons. I have the buttons, the wires, the keyboard encoder, a plank of test wood, a drill and a hole saw. Dayna has a t-square that I am sure I can use to draw lines and align things.
the dark and gritty...Ice Cream Jonsey!
Top

I managed, over the course of the evening to get five holes in the block of wood. It was very, very difficult as I just have a 9.6 cordless drill and it really ran out of power after three holes.

I now have a long plank of wood hooked up to the keyboard encoder. The five buttons are layed out like they are in Asteroids for MAME. There is one problem: it is not very responsive. Whether this is because I do not have good connections for the wire onto the clips on the buttons (how are you supposed to twist them??) or because I am using the defaults on the keyboard encoder -- keyboard -- instead of joystick buttons I do not know.

I am going to try to program the encoder tomorrow.

Playing Asteroids, even in this not-quite-perfect-YET manner is still very satisfying. Ben was right to give the finger to gamepads.

I think, with one more hole, I could get my spinner's knob into the plank. I would then need to disassembly the joystick, drill a hole, and insert the shaft of the joystick down into the plank, re-assembling it on the other side.

Oh! And I should probably pick a color.

And install the player one and player two buttons. (But those are kind of low priority.)

But so far, so good.
the dark and gritty...Ice Cream Jonsey!
Top

No progress tonight, as we were looking at houses in Thornton and I am doing a special project for Adam "I Want to Live in" Thornton, but here is a picture:

I have to buy a saw and also figure out if the 1 and 1/8ths inch hole is big enough for the spinner knob to fit through!
the dark and gritty...Ice Cream Jonsey!
Top

a ruler could help you with that..
or a piece of paper + a pencil.
Just call me HandiStraw.
Top

Jack Straw wrote:a ruler could help you with that..
or a piece of paper + a pencil. Just call me HandiStraw.

I do not like the "feel" of the Happ Super Joystick, because I cannot get it to reliably click. It misses a great number of requests for input. And I'm just trying to play Pac-Man with it.

I found a review of it, complete with a video, on RetroBlast!, and the guy there seems to have no problem whatsoever. So that's troubling.
the dark and gritty...Ice Cream Jonsey!
Top

I am thinking of Gorf.

the fouir directional grip stick that was illuminated blue. with the trigger fire button. i would bneed to see a picture of the spinner stick to uinderstand what the issue is.

THE
GRAB IT
LIKE YOU MEAN IT
AARDVARK
Top

AArdvark wrote:I am thinking of Gorf.

the fouir directional grip stick that was illuminated blue. with the trigger fire button. i would bneed to see a picture of the spinner stick to uinderstand what the issue is.

I basically took my spinner apart and tried to put it back together three times. On the third time I got it back functional. I am not 100% of exactly how it is supposed to work and there were no schematics, but I'm just happy with how it is now. Even though it's noisier.

That being said, I think my main problem is that I am playing four-way games with a microswitched joystick in 8-way mode. Nothing I can really do about that... but in a couple years when I have the time and resources to make a MAME cabinet, I will definitely be adding a four-way stick to the front-center of the control panel.

So. The custom box I was making is pretty much finished. I am debating whether or not to add the Player1 and Player2 buttons to it. I also have an extra red button that I might make Coin1. I don't know -- I got the holes perfect for the other buttons and I am hesitant to add more opportunities to fuck it up. Oh, what the hell, I'll add them. They look nice.

The joystick looks a little shitty because I did not / can not put the circular disc between it and the board. If I do that I muck up joystick's ability to hit the switches. Lesson learned: don't use inch-thick board for the control panel. Half an inch will be fine in the future.

I think I will try for a SlikStik spinner for the in-the-future MAME cab. It's $80, so it's nothing I want to buy now, but it looks sharp and every review it has just glows.

Next steps for the custom box: paint it. I want an Asteroids color scheme for the buttons, so I need to see if it's possible to at least have it resemble that. I want the rest of it to be black and gold.
the dark and gritty...Ice Cream Jonsey!
Top

When he says 'slightly noisier', he means a perfectly running fan compared to one with the blades all cattywumpus hitting the grill. It sounds like shit.
Top

Vitriola wrote:When he says 'slightly noisier', he means a perfectly running fan compared to one with the blades all cattywumpus hitting the grill. It sounds like shit.

The tactile feel is much better, however. I promise that your Arkanoid scores will go straight up!

Best of all, we can still make it a two-player, single-player game with the new control box because I'll just map "fire" to the mouse button.

See? Who needs things done the old and horrible way? This way is BETTER.

(For what it's worth I can never get past the one screen in Arkanoid where it's shaped like an ant farm. I need Dayna to do it for me. I cope by being better at Centipede and Millipede.)
the dark and gritty...Ice Cream Jonsey!
Top

Ice Cream Jonsey wrote:I cope by being better at Centipede and Millipede.)

If you mean every weekend when you crawl under a pile of your own garbage and leaves and nest for 18 hours at a time, then yes.
Top

Here's Robb making his spinner. What could go wrong? 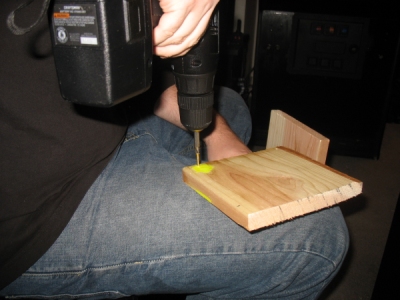 
it's probaly easier to replace a leg than an eye.

Unfortunately, it still doesn't work great when it comes to registering every input 100% of the time. I posted to a thread over here, where another guy had the same sort of problem.
the dark and gritty...Ice Cream Jonsey!
Top

If the Amish made video games thats what they would look like.

Looks like a winner to me. This from the mechanical genius that made franken-stick.

AArdvark wrote:If the Amish made video games thats what they would look like.

Looks like a winner to me. This from the mechanical genius that made franken-stick.

Thanks! Still need to paint it, of course, and it could probably use a supporting piece of wood in the middle of it (if I can get it the right size).

The fact that you can see down into it from the joystick is crappy, but because of the thickness of the wood, I am not sure if I can do anything about it.

The next thing I am going to try is plugging the KVM keyboard cord directly into the IPAC (in passthru mode). If that doesn't improve the click-through rate then I guess I have to get those specialized connectors.
Top

I grew increasingly frustrated at the poor responsiveness. Was the IPAC-2? Was it the microswitches? Was it the amount of energy my computer could produce for USB devices?

So I soldered the wires together. I didn't permanently attach them to the IPAC2 and that was really the only difficult-to-replace part in all of this. For $20 the Real Bob Roberts can get me another copy of all the other parts I've used so far.

It works better. It's not perfect, but it works better. I suspect there's always going to be a little trouble because I am trying to play 4-way games in 8-way mode. I would definitely go a different direction than the IPAC for my next encoder and I'll have those spade connectors. But in a few years when I get ready to do a MAME cab, I'll at least not have to reinvent the thinking process for a lot of this.

All right, need to paint it and take more pics. Because there are so many purple buttons on it, I think a black and gold color scheme would look bad. I'll get the majority of it black, first, though.
Top

The owner acknowledged that some chips had a latency problem that went out at the time I grabbed one. I just sent a note to Andy at Ultimarc to see if he'll ship me a fix. Here's hoping!
the dark and gritty...Ice Cream Jonsey!
Top

The new chip WORKED. This is fucking AWESOME. The control panel is as smoooooooth as butter.

It really helps you understand why people make these things. I was struggling to simply through a maze in Ms. Pac-Man yet, with a decent encoder, I got all four ghosts four times on the first board. This is great. Big ups to Andy at Ultimarc who really stands behind his technology.
the dark and gritty...Ice Cream Jonsey!
Top
Locked
45 posts