Me and Newt, we used to do the Sveeterhraaangan run in five parsecs. Ha ha, I don't even know what that means. Newt would always handle the navigation. He knew the best
spots to go and what routes to take and how to get there without anyone seeing you.

Once he spent an entire week hidden under some scaffolding, blankets and bed covers in his ship in order to evade some Thr'aa'kiaan fascists that were boarding every ship in the sector. He spoke once in all that time. An entire week of hiding out and the only time he spoke up was when I re-positioned myself and poked him in the belly.

"MeeeEEEEEEAAAAAAAAAAAnnnahnnnnnnn!!!!" he yelped. But he didn't move! He wouldn't move. That's the kind of guy he was. You could have poked him there for an entire chron and he wouldn't move. He loved people.

Newt was one of those feline-canine-human mixes. With the outlawing of menacing-level genetic engineering in 3773 you couldn't even make breeds like that any more. He was like the last of his breed. He had a boyishly handsome round face like a kitty-cat, social knowledge and networking skills of Johnny Carson and a voracious appetite for pork, chicken and giblets like a starving rottweiler. Once I saw him go through three cans of military issue pork gibblers without even picking up his fork. I was still trying to get the top off my can and he was reading the label on a fourth deciding if he wanted it, too. (He did, too, an hour later.) You take anything found on a farm or, let's be honest, a grotto, put it in a thick gravy sauce and he'd turn on it like it was fairy cake. I'll never forget the way he'd eat.

Sometimes he'd hang out with other members of his races. I remember once he and some more feline-level furry girls were all tipping over a can of garbage. Don't ask me why. They finally got it to roll over and it came down with a resounding "CLAAAANG!!!" This was over on Maloonan IV, where that kind of stuff ain't tolerated. I stuck my head out of the discount apartment we were sharing and saw him in the alley below trying to clodhop his way out of the scene before the authorities arrived. He looked like all four of his legs were too short for him. Is that even possible? How are ALL your legs too short? But that's what it looked like. It was hilarious.

It was last Tuesday that brings me to where we are now. He took the brunt of that laser blast and I didn't even see the perp brandish his star-pistol. Extensive neurological damage. He couldn't walk. He strayed a little from people, his friends, everyone. Me and Dayna never saw him like that before. He purred when we brought him home for a little bit but was off food. Him! Newt!! Off food?!? It just wasn't like him. I prayed every night that I could save him. I wish I could have done more. But I'm just a dumb kid who doesn't know the first thing about keeping his best little buddy healthy. He had to take some gum-flavored anti-biotics to get better, but it wasn't working. He was in pain constantly. The little guy who would jump around happy to hang out with people was only getting worse.

Today at around noon the doctor gave him the anesthesia that gave him his release. He quietly passed away and I cried like a four-year old girl with a skinned knee. I'm still bawling out, trying to write this now. I'll never see another guy like him and I already miss him terribly.

I love you, Newton.

I got Newton when I was 18 years old. My mother impulsively decided she wanted a dog, and an attack dog at that. We go over to the local shelter, and while she's trying to manoeuver her way around the business end of a doberman that nobody thought a 5' 2" woman should even be allowed to consider bringing home, I was hanging out by the front door when a women walked in with a mama cat and 4 of the cutest kittens ever. I gazed adoringly, as teen girls are wont to do, and she slows down and whispers 'get one here and you won't have to pay the fee'. I grabbed the cutest of the cutest (and one of his brothers, I'll admit, but decided whereas 1 might go unnoticed by my mother, 2 would turn into zero and so put the second one back) and meandered back over to the shrieking dobie, who immediately took a lunge at the 4 week old leggy thing and started snapping it's jaws. The dog went back, as it became increasingly more difficult for my mother to believe this dog would fit into our cat-run home, and the ball came home.

Later on I had him out on the deck in the sun, as he was still a little too young to walk right, and accidentally left him on a low table, which he immediately dropped off of. "Newton', I decided, thinking that if Isaac had had a kitten instead of an apple, he would have been too busy checking all the limbs for injury to posit new hypothesis.

He was fat and happy, he got to be fat and happy and healthy right up until the last few days. He was Good Boy, and I wish I could crawl into bed with him right now. 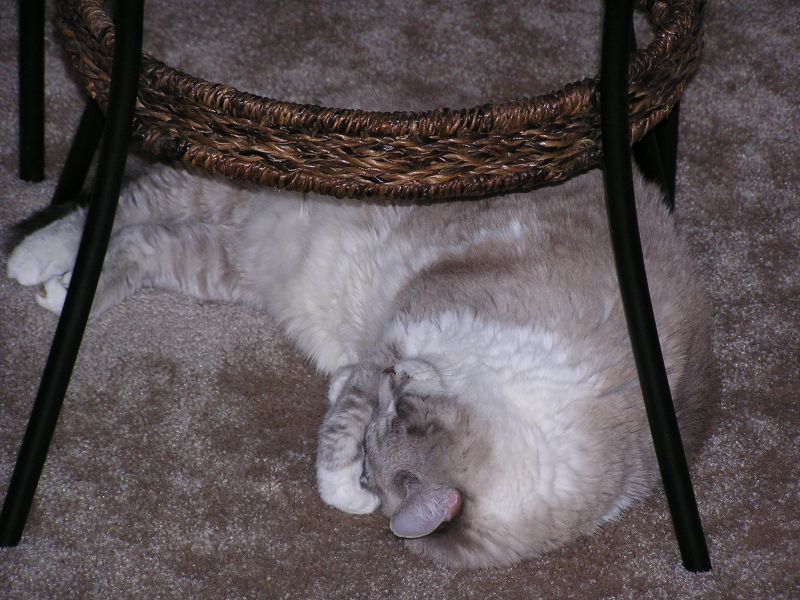 Newton was the second-best cat I ever had the pleasure of knowing, taking a backseat only to Bennie (the F209 cat). In fact, he was better in many ways, but I hadn't had the years with him that I had with mine.

He was better (and thus better than any other cat ever) not because he was big and happy and goofy and stupid -- though those are all wonderful qualities in a cat. And not because when I first got to Colorado, I walked in, the two other cats ran for the hills (nearly joined by ICJ and VX, who were just as frightened of me, but had the social graces to remain in the room), but Newt, he just stood there next to me, looking up at my face, with an expression he carried better than any of us, which just said, "DUHH???"

And not because he sat directly under the center of my dining room table without any posing or prompting whatsoever (see pic above).

Newton was arguably the best cat for one single reason:

He would growl when he ate. THAT'S how much he loved his chow.

At my new job, I never go to lunch with anyone, because I don't like to be distracted when I eat. I don't want to have to make smalltalk. I don't want to have to deal with people and their petty interoffice babbling and their stories about their weekend. I just want to focus on the one thing in my life that I can always count on for pleasure. So I drive to the Harris Teeter grocery store, grab a Vietnamese ricepaper roll and a couple nectarines, and head back to my car. I sit there listening to sportstalk, and eating my lunch, by myself. And if another car drives past, or someone walks by in the parking lot...

We were a lot a like, me and Newt.

Plus, that cat could drink my mother under the table, and even I can't do that.

Oh yeah, also, you could piss him off to the point where he would hiss and spit at you, but he'd still never move. It's like he was saying, "I hate you with the white-hot intensity of a thousand suns, but you're still not important enough to make me change my routine of sitting here all goddamn day waiting for dinner."