Playing GameCube ISOs from a HD on the Wii

Playing GameCube ISOs from a HD on the Wii

Modchips are devices that allow consoles to play pirated games. Sure, some people like to point out that they also allow people to play emulators, homebrew games, and games from other regions (like PAL), but c'mon. We all know the score.

The one exception might be the Nintendo Wii, which gains a gob of new features by being modded. For example, Nintendo refused to pay the licensing fees or include the software needed to play DVD movies on the Wii. Modding the system enables that feature. Modding the Wii also allows users to store and play games from a USB hard drive, instead of using physical discs. ISO images stored on the hard drive are presented graphically, where gamers can choose the game they want to play by pointing at a picture of the case using the Wiimote. It's mind blowing to me that hackers, and not Nintendo, came up with this. As a parent who purchased three copies of Wii Sports (one got scratched beyond recognition, one got stepped on), the ability to play games stored on a hard drive is a parents' dream. It's super helpful, even if you never pirate anything. You can insert your original games and the software will dump it onto the attached hard drive.

Installing a physical modchip in a Nintendo Wii is pretty hard. Softmodding a Wii is insanely simple. To softmod a Wii you'll need an SD card and one of a few specific games. On YouTube, half a million teenagers have uploaded videos that walk you through the process. As long as the SD card remains inserted in the Wii, the console remains modded. It's a bit like black magic and it's disconcerting how quickly and easy the process is. (The one caveat is that it cannot be the final hardware revision of the Wii, which does not contain an SD card slot.)

Several years ago I picked up a complete Wii with two controllers for $10 at a local thrift store. The DVD drive had failed (a common hardware failure for the system), but a modded Wii has no need for it. Using free tools on your PC you can transfer (or download) Wii games to a USB hard drive, connect the drive to your Wii, and play away.

One of the things I've never tried was playing GameCube (GCN) games on the Wii. The Wii actually has controller ports for GameCube joysticks and will play GCN games from disc. A recent conversation about some of the GameCube's Star Wars games got me thinking -- can it play GameCube ISOs as well?

It sure can. Previously I've been using Game Launcher DX to load my Wii games from hard drive, but for playing GameCube games, I found a program called Nintendont. (Cute.) Installing Nintendont involved downloading three files (less than 2MB total) to my Wii's SD card. Years ago I transferred the five or six GameCube games I owned to ISO files. Using an old USB hard drive, I moved the ISO files to the hard drive and put them in the format Nintendont looks for (usb1:/games/(game name)/game.iso).

With that, I was up and running. Over the years I've picked up several GameCube games that I haven't played, due to fact that my GameCube's been packed away. Using free tools I was able to transfer those to that same hard drive and finally play them.

That sounds like the direct opposite of the PlayStation, almost lkke they wanted people to mod the things thus saving Nintendo the costs of making the system bulletproof and encouraging people to keep using the Wii

You know, if Nintendo had come up with a similar system, except that it encrypted the games on an external hard drive so that they would only work on that specific console... it would have been the greatest system ever. A lot of Wii and GameCube games were skewed toward younger gamers, and having them presented in a manner that doesn't even require a kid to READ is just fantastic. 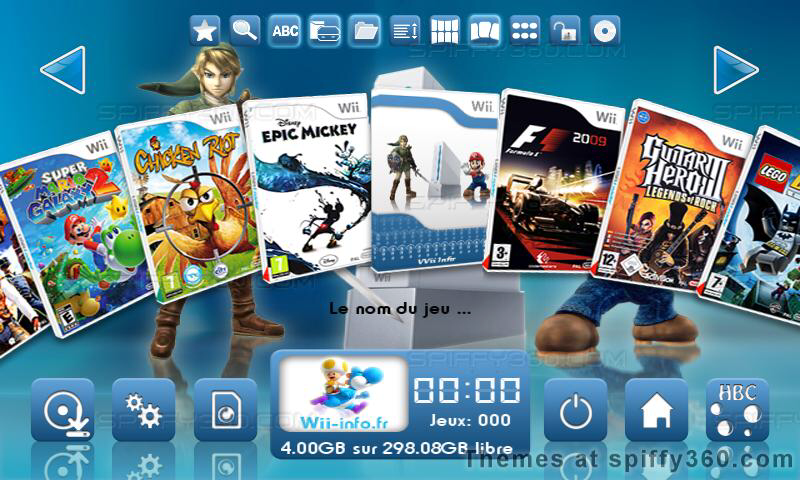 This is one of the default skins/layouts built into GX USB Loader. Again, this is something the Wii cannot do out of the box. Hackers created this entire interface. All you do is put games on a USB drive and plug it in and the program goes out, magically downloads all the artwork, and presents them in a fashion that you can simply point the Wii's magic wand at and say "play that." The buttons at the top are additional layouts -- you can display your games in a list, as a big wall, or fanned out like cards. I wonder if the people at Nintendo ever wake up and think, "wow, a bunch of kids not only smashed all our copy protection, but improved our console in the process."

Oh, I almost forgot. Modding the Wii (either soft or hard) also allows you to install downloaded .WAD files, which were all the games from the Nintendo store, and emulators, because every system needs to be able to run an emulator. If you bought virtual games from the Nintendo store years ago and lost them, you're SOL... unless you mod your Wii and copy them back over. I'm telling you... I hope the teenagers that came up with all this stuff got job offers rather than warrants.
"Jack Flack always escapes." -Davey Osborne
Top

Wow, this is amazing. I should have learned to do this years ago.

I shouldn't ever have bothered with a modded x-box which was such a worse solution. I paid Jack straw almost $400 for a [well used] but modded xbox 1 and a shitty box of copied games, half of which didn't work. I think I ended up selling or giving the whole box of the shit to Aardvark sometime in the early 2000's, the only time I met the guy in person at his house. Then I doubled down and bought Straw's differently modded xbox 360 which within a year gave me the red ring of death. Now, I've completely given up on the idea of not paying for games, shit I don't even have time to play the ones I've paid for and MSFT is charging me $10 a month for online access that I don't want.
Top

This stuff changes all the time, and there have been huge advances over the past few years that frankly I kind of missed out on. About a year after buying my first PS3 new ($600), I bought this mod thing for it that both plugged into a USB port and required internal wires to be run. Every game you downloaded had to be patched with patches and software only available on the website that sold the modchip. Of course when they went out of business, the whole thing fell apart. Fast forward to a couple of years ago and I bought a fully modded PS3 off of eBay for $200 that can play PS1, PS2, and PS3 games all off of an external hard drive.

The Wii (and I believe the original Xbox) are the only two systems that can be turned completely inside-out with only a soft mod. The softmods available on the Wii are so simple that any kid could do it. The hardest part about modding one now is listening to some kid with his mic turned up too loud on YouTube saying, "um, okay, like, now dood, um..."

A modded original Xbox was probably the most versatile system around. Emulation-wise, I think it's pretty close to the Wii when it comes to homebrew emulators available. When it comes down to it, the only real deciding factor is whether you want to play Xbox games, or Wii/GameCube games. And if neither of those things are important, a $35 Raspberry Pi will meet your needs. [EDIT: If you're using it to stream movies, the Xbox wins out over the Wii.]

For what it's worth, I also bought an Xbox 360, modded it, and ended up getting RRODs on it less than a year later.
"Jack Flack always escapes." -Davey Osborne
Top

Now is the sweet spot to get a Wii. There's going to be handtrucks full of them. Get in now!
the dark and gritty...Ice Cream Jonsey!
Top

Why the opportunity? Whats going on with the wii economy?
Top

Hell yeah. Glad to see you getting the max out of the Wii, Flack! I've been thinking about doing the same to mine, but I would like to finish playing RE:Zero (Gamecube disc) first. That was really cool of Nintendo to add all those GC controller ports, eh? I love my PC Engine/TurboGrafx 16 shit but wtf 1 controller port with requirement of a *hub* to connect more controllers? GTFO
Top

Now I'm bummed because I gave mine away. I always kinda thought of the Wii as a kids toy rather than a more mature console. Plus you have to wave the stick around and stuff, can't just slouch on the couch twiddling the thumbsticks.
Top

Some is, some isn't. My friend Jeff and I had a blast drinking some beer and playing through this:

Hell yeah. I have the original disc for that one!
Top

Flack - can I post your article on Caltrops?
Top

It looks like the RVL-001 is going to be totally fine for this, the original WII.
the dark and gritty...Ice Cream Jonsey!
Top

Flack, sorry to pester you with this - but there's nothing particularly wrong with auctions like these, right?

Is $60 a good range for a Wii?
the dark and gritty...Ice Cream Jonsey!
Top

$60 is high considering all the things that one is lacking. It says console only, which means you need a power supply, sensor bar, at least one Wiimote, and if you're wanting to play GameCube games, at least one GameCube controller. There's one on my local Craigslist with everything but a controller for $50. There are several Wii consoles on shopGoodwill.com for $30 or less.

I'm not sure if the black Wii has GCN controller ports or not, so that might be an issue. Definitely stay away from the mini -- they're lacking SD card slots and WiFi, which makes them impossible to softmod.
"Jack Flack always escapes." -Davey Osborne
Top

I remember "homebrewing" my wii when I was in high school, and getting crazy hours out of the stuff people putnup. Never even realized I could have side loaded full games to it. I might have break out that old white box and play some of the games I never got to play. Thanks for the info Flack
Top
Post Reply
17 posts • Page 1 of 1