I'm not big on change, but sometimes shit happens. My coworkers and I go out together for lunch twice a week. We go to the same Mexican restaurant every Tuesday, and the same burger joint every Thursday. Each week we sit at the same tables, and get served by the same waitresses. The waitresses know our orders; we know their names.

Over the holidays, our Mexican place closed down. Now, we need another one. It's gotta serve beer, be close enough to work that we can eat there and get back within an hour, but far enough away that we won't run into a bunch of our coworkers while drinking beer. It's also gotta have a waitress willing to memorize our orders and tell us her name.

A few months ago a new place opened up, pretty close to the other place. I believe the name of the place is BURRITOS, as that's the only thing written in English on the outside of the building. The building used to be an old Shell station. Now it's purple. I drive past the place every day and wonder if the burritos are any good. I think they probably are; you would think any place named after a single type of food would excel in preparing it. I never stopped though, because I already had a Mexican place. But that place closed, and well, shit happens. So today, we went to "Burritos."

Burritos is located next to (and I shit you not) a strip club named the Double-D Saloon, best known for it's Double-D's. The parking lot of the two establishments touch, and the sign for the DD is advertising Thursday night vibrator races. While walking through the parking lot I discovered that Burrito's gas pumps were still functional, and suddenly I feared we were entering a convenient store, instead of a place that used to be a convenient store. I joke that Burritos is missing out on a great advertising opportunity; they should advertise themselves as a Mexican restaurant that's a great place to get gas. Nobody laughs, because they're mad I have dragged them to a convenient store for lunch.

Inside, the bones of the old Shell station are still there. A set of shelves against the left wall contain cigarettes, condoms, and Ibuprofen for sale. On the other side of the store, the wall-length freezers are still in place and full of beverages. There are bottles of water and pop, cans of Mexican Coca-Cola, 40oz'ers, and six packs of beer.

I order a #21, the last burrito on the list. It's "chicken with green sauce." Just to clarify, there were 20 burritos before that on the list -- ground beef, steak, steak and ground beef, maybe ground beef and steak. At the other place one of my coworkers ordered nachos and the other ordered a taco salad. Today, they're having burritos. One of them says they should change the name to "ONLY Burritos" and we wonder if maybe in Spanish, "only" is implied.

Each table was covered with a mural of a Hispanic town. All the chairs appeared hand-carved, with toucans on the back, but they are all identical, and not hand-carved. On one side of the front door is a set of plastic garage shelves full of generic pottery for sale. On the other side of the door is a red vinyl bench with a mural of a mariachi band on the back. I assume the bench is where people wait for to go orders, but there are ten tables and when arrived (during the height of the lunch rush) all ten were available. Unless some amazing shit happens here in the middle of the night, I can't imagine a scenario in which there is no seating available.

Before our food arrives, I go to the bathroom to watch my hands. There is one bathroom with a sign identifying it as the restroom for men, women, and people in wheelchairs. There is nothing cleaner in the bathroom than my hands were when I arrived, so I return to our table with dry hands.

Our burritos arrive wrapped in foil and inside plastic baskets, along with a 4" long grilled jalapeno. My official review of the pepper is, "hot as fuck." The burrito was medium sized; bigger than a bean burrito from Taco Bell, but still easily picked up with one hand. The green chili sauce was good. The chicken was cooked well.

None of us ordered beer; on the off chance we encountered another coworker, neither a 40oz beer or a six-pack sitting on our table seemed professional. 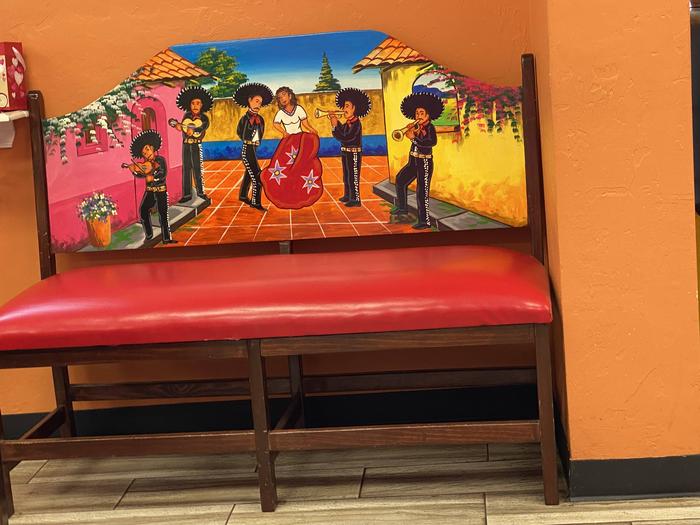 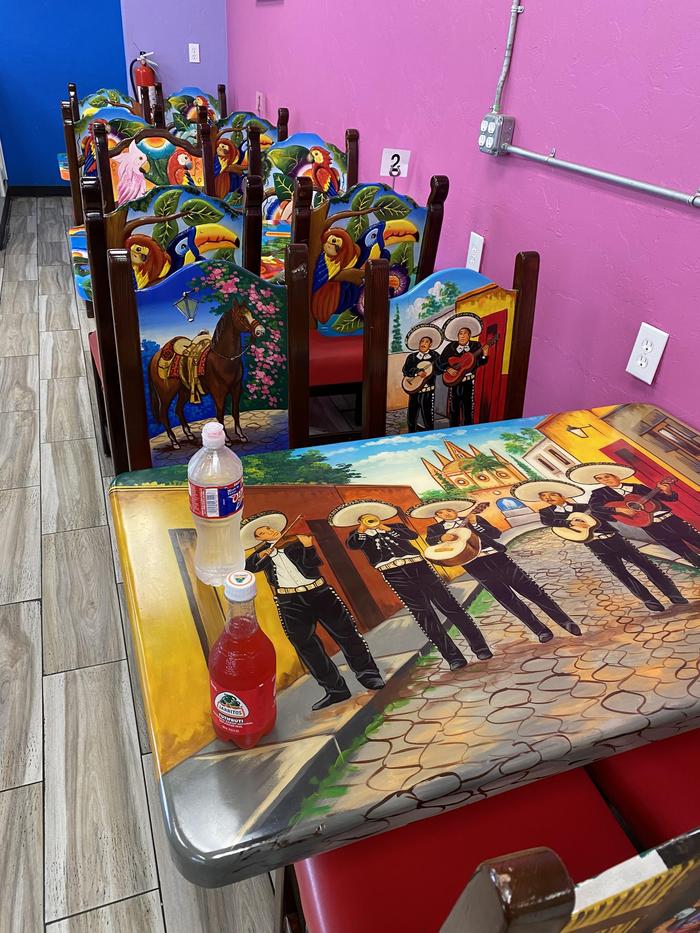 Looks pretty sweet. In my experience, the quality of Mexican food is inversely proportional to how comfortable you are going into the place that serves it.
Above all else... We shall go on... And continue!
Top

Those are the chairs they have at Monte Alban
Top

Hahah yeah usually the ones that are the "scariest" are the best ones! I've had a few exceptions though. There's one near me that the cooks just look and act like they hate me, hate life, or both. Never went back. Most people are friendly you're spending money at small places like that so I dunno wtf their deal was.
Top

I wonder if they are...inserted before the contestants run
Top

After taking a second look at that picture I took, I forgot to mention the multiple phone-charging opportunities located near our table.
"Jack Flack always escapes." -Davey Osborne
Top
Post Reply
7 posts • Page 1 of 1