As construction continues on my shop/home theater, I'm preparing some of the other pieces. One idea I've had for a while is coming up a way to simulate the theater experience. I'm not talking about people talking and kicking the back of my chair throughout the film (maybe in version 2.0...) but instead what I want to do is generate short playlists based on the movie I plan to watch.

Here's the concept: before watching a film, I would run a script that would prepare a playlist. The playlist should include commercials/teasers for theaters, a random number of movie trailers, and then the movie. I want to build a lot of randomness into the script so that I am surprised by the results when I start the playlist.

To prepare for this, I have downloaded 50 or so theater/drive-in commercials, and nearly a thousand movie trailers. It's almost 2020, folks. Hard drive space is no longer a thing.

Here's a bit of pseudo code to explain what I'm thinking.

The idea being before I go out to the theater to watch Meatballs, I would run the script and it would generate the playlist. By the time I got to the movie theater, I would instead run the playlist and be treated to a few commercials, some random trailers, and then the movie. It's no fun if I build the playlist manually, because I'll know what the trailers are going to be. I think it'll be way more fun this way.

I haven't decided if the end product will be command line driven or be GUI based. If it's command line, I'll have a separate file with all the variables set there so that changing things like the number of trailers picked or the year variance are easily changed without going into the script itself.

I'm really posting this as a place to track the progress, and also to commit to writing it.

Admins: if this works better in a different sub, feel free to move it.

Here's an example of one of the "commercials" I found. There are hundreds of these online. Most of them are drive-in related ("let's all go to the loooooby..."). Snack Canyon: https://www.youtube.com/watch?v=VYUKt2zfBlk

EDIT: One other thing... there are more than just commercials and trailers -- for example, there are theater policy trailers and those "Dolby Digital" (or thx, or whatever) bumpers. So in theory all of those could be listed as separate categories and added to the list as such. That being said, the idea is to make it fun, not add 20 minutes to the beginning of each movie I watch.

Will you use Timmy the trash can? He's my favorite

Man, this sounds like a ton of fun. I can visually how it might be scripted in bash, so if you have questions there just let us know. A GUI would also be cool! Pinback turned me on to some software that sets up an Angular (JavaScript) project for things like this. And of course I can't remember what it was called. I think it had Blitz in the title maybe.
the dark and gritty...Ice Cream Jonsey!
Top

I would love to add that one (and probably will) but that brings up one of my frustrations with this project... people taking old videos like that and putting a watermark for their shitty website across the bottom. I'm sure film-tech.com is real proud that they uploaded something to YouTube, but it sucks when you're trying to build that theater experience and all the videos have other people's websites plastered across the screen.
"Jack Flack always escapes." -Davey Osborne
Top

Ice Cream Jonsey wrote: ↑
Sun Nov 24, 2019 2:25 pm
Man, this sounds like a ton of fun. I can visually how it might be scripted in bash, so if you have questions there just let us know. A GUI would also be cool! Pinback turned me on to some software that sets up an Angular (JavaScript) project for things like this. And of course I can't remember what it was called. I think it had Blitz in the title maybe.

There's a website called PoSHGUI that helps you convert command line PowerShell scripts into gui-driven apps. Once you have the command line version done, all you have to do is upload your script and then change it to pull all your variables from text boxes or whatever. I'll bang out the PS version first (importing all the variables from a text file) and then convert it to a GUI and just populate all the boxes with the values from the text file.

Another side project is, there are lots of YouTube videos with tons of drive-in intermission clips which I'm planning on downloading and then slicing back up into the original files so they can be called one at a time.

I see the Internet Archive has a lot of these with no websites, no timmy the trash can tho.

edit: I just saw a No Boning warning from the management during one of these intermissions HEHEHEHEHEHEHEEEEE

That brings up another point, something I just discovered. I may need to create a separate folder for (or something in the filename to flag) the R-rated ones. I forgot how quickly the tops came off in the Andy Sidaris trailers, for example.

I've got it pulling random trailers in random order and appending them to a playlist. I also added a couple of "mandatory" files. I want this one to play between the trailers and the movie.

Well it's done, or at least as far as I'm taking it at the moment. I traded some of the random generation for the ability to create your own structure. Here is MovieNight.txt:

The playlists are built by using the add commands. In the above example, the script will add a required file at the beginning of your playlist, followed by two commercials, three trailers, a theater policy, a "and now a feature presentation" clip, and then append the movie. The year variance adds and subtracts that many years to pull trailers from, so if you were to generate a list for the original Ghostbusters (1984), it would pull from a random list of trailers from 1982-1986. There are some years that I don't have a ton of trailers for, so that helps randomize things a bit.

I also added the ability to search for a movie, because typing in my long-ass paths and filenames to each movie is a real pain in the rear. It takes longer to run this way (about 30 seconds to find the movie and generate the list) but it's about the same amount of time to go find the actual path and cut/paste it into the command line.

Anyway, here's the output generated from the above input:

These playlists work in VLC, but I'll have to change them from absolute paths to share paths to work with Kodi. I may add a variable at the beginning so I can generate either one.
"Jack Flack always escapes." -Davey Osborne
Top

Wow, how do you have kids and have time for wicked cool shit like this. I don't even have a cat anymore and I cant find time to play RDR2 with any regularity.
Top

This is really cool stuff! Something Weird has like 2 hour volume collections of intermission films: https://www.somethingweird.com/product_ ... s_id=58069
Top

That looks pretty good. And from what I found, there are three volumes of them now. I have a lot of those clips, but those might be in better condition.

You should package this into an app and sell it. I bet lots of people would love the idea.
Top

As soon as I read this, I spotted the error immediately. And as educated as you are, Flack, I'm really surprised you made this mistake. See, drive-in theaters do not have lobbies; only indoor theaters have them. What drive-ins do have is a single building (that also includes the projection room) which is usually called a concession stand or snack bar. I don't think any drive-in would seriously run a video telling people to go out to the nonexistent lobby. At least not without looking stupid.

I've been to the Bengie's Drive-In Theater in Essex, MD near Baltimore, several times, both before and after I lost the ability to walk (interesting story I'll save for later) and I watched the in-between ads and announcements (including one where it warned customers the speed limit is 15 mph, and the theater's owner, D. Edward Vogel, was announcing over the PSA that at the Bengie's the speed limit is 5). Not once did any of these ads or PSAs use the word "lobby."
"I'm on a bus, on a psychodelic trip. Readin' murder books, and tryin' to stay hip."
-Billy Idol,Eyes Without a Face
Top

Tdarcos wrote: ↑
Tue Dec 03, 2019 5:26 am
I've been to the Bengie's Drive-In Theater in Essex, MD near Baltimore, several times, both before and after I lost the ability to walk (interesting story I'll save for later) and I watched the in-between ads and announcements (including one where it warned customers the speed limit is 15 mph, and the theater's owner, D. Edward Vogel, was announcing over the PSA that at the Bengie's the speed limit is 5). Not once did any of these ads or PSAs use the word "lobby."

As for Bengie's Drive-In, they literally have the characters from "Let's All Go to the Lobby" posted right on their website under the "snack bar" heading. 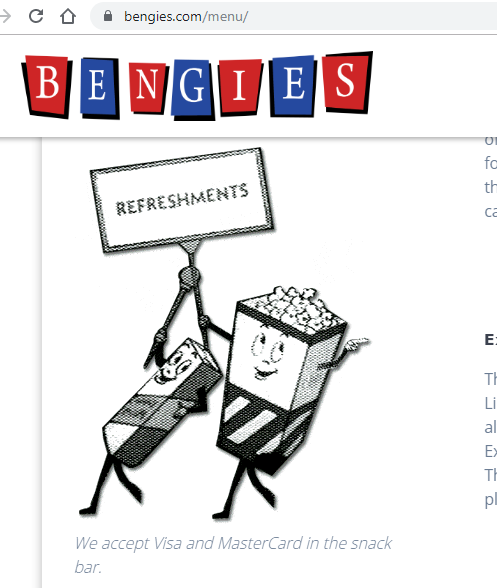 As educated as you are, Paul, I'm really surprised you made this mistake.
In the yard, not too far from the car.
Top