Casual Observer wrote: ↑
Fri Nov 23, 2018 11:55 am
Bump. Pics and reviews of this year's Heritage turkey to follow once I have a chance this weekend. Spoiler: yum!!

Waitasec. Jiz must be kidding. This I one of my favorite yearly threads. Please post updates and pics! We are not doing turkey this year so I want to live vicariously through you, CO.
the dark and gritty...Ice Cream Jonsey!
Top

What are you doing instead ICJ? Ham? That would be interesting to hear about.
Top 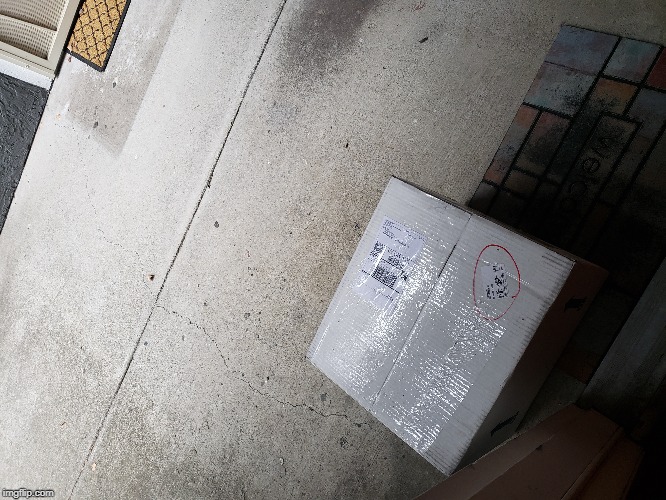 Yay! UPS updated their shipping schedule and delivery just happened. Looks like we get a whole 2 days of brining mofos. This (I assume lovely, not having opened the box yet) lovely bird was raised by "Mary's Poultry" which is a huge thing here in Cali. You can't go to a restaurant without the menu having a "Mary's Chicken", it's really fucking trendy here. Of course all of the chickens, turkeys, and ducks are wholly organic and free ranging, petted and hugged, etc, although unlike in the Bobs Burgers episode I haven't yet seen a card with its name on it. I'll have to come up with a name myself. Apparently most whole turkeys bought are hens except the larger ones so at 22 pounds this one might be a tom, so who knows what kind of name to give it.

The first year and this year I bought it from an organic store in Fresno, dealing with the owner Cynthia who is affectionately known by her employees and customers as "The Turkey Lady". Last year we waited too late and couldn't get one from Mary's, instead it was shipped from some farm in Arkansas and frankly wasn't nearly as good. We're lucky to be in the bay area because this year Cynthia has stopped shipping turkeys to anywhere else due to the sheer soul crushing amount of work it is for her.

I'll open the box this evening, apparently it's still defrosting. It was slaughtered a couple of weeks ago so had to be frozen. They do something called "flash freezing" which freezes the thing so fast that ice crystals don't get a chance to form. Apparently they use super chilled air to do this so that when defrosting you don't lose any moisture which seems important. It's been defrosting for a couple of days now so should be just right for brining. Fun fact: when I was in college I remember watching congressional hearings on CSPAN about the difference between fresh and frozen poultry and guess what, there's literally no difference as far as the law cares. "Fresh" poultry has always been frozen at least once before you pick it up in the store. You would have to literally go to the farm and pick it up right after slaughter if you want a never frozen bird. I guess that actually used to be a thing though, apparently my wife's grandmother used to go to a farm outside Rochester and kill the bird herself, even one time doing it so wrong that it ran around like the famous Miracle Mike the headless chicken that lived for 18 months without a head.

I was at Winco last night and people were freaking out because they ran out of frozen Butterballs. Ha ha.
Top

Hahah even if those people got those frozen Butterballs last night they probably wouldn't even be thawed by Thursday morning!

I bought a 20 pound "fresh" Butterball for 20$ at Food Lion on Monday. NO REGRETS
Top

Also, apologies for my strong wording last year on the topic. However, I really enjoyed cursing about how I could give two shits about 100 turkeys hahaha <ahem>
Top

Cursing and ranting online are one of modern life's few pleasures on the internet.
Top 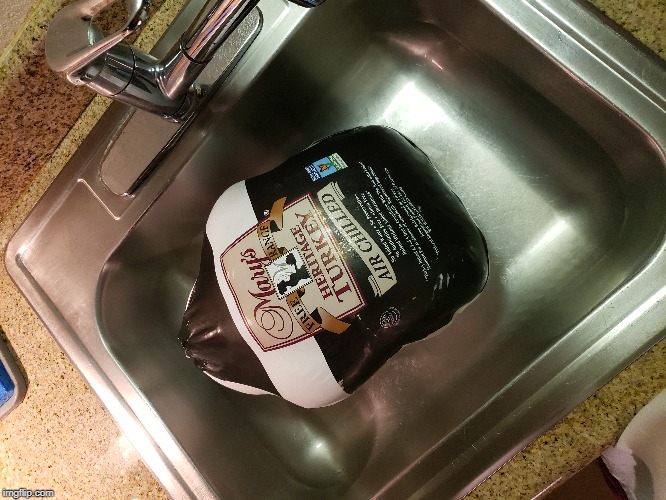 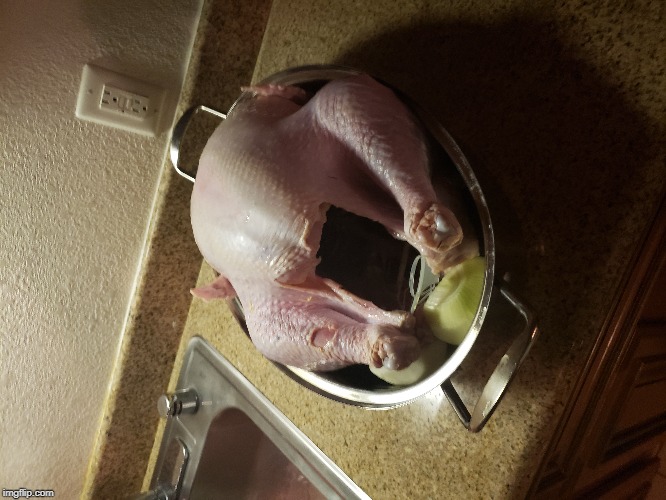 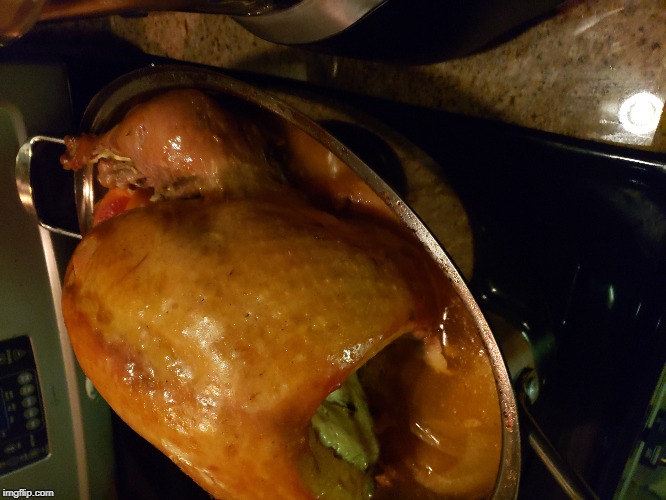 Hope everyone had a great Thanksgiving! I named this Heritage Turkey as Tom (since I'm pretty sure it was a male). This year we changed up a little bit, in addition to stuffing with onions and scallions, we added a bit of citrus stuffed in the bird. I mean, who doesn't like lemon + something chicken so why not turkey? The lemons and one orange added just the slightest bit of citrus flavor to the meat and more importantly the broth and then gravy. Took this guy out at 170 degrees because we really prefer a bird that is cooked well enough that the legs wiggle when you shake them.

Once agein the flavor was awesome, white meat is really good but this time the dark meat is the real star. Literally melts in the mouth, the moisture in the meat bursts into the mouth and the flavor is like a bird shouldn't ever achieve. The gravy is the real star of what happened here because of the layers of flavor it brings.

Here's the problem here: the price went up this year. I won't mention the actual price here because I don't want to be called a yuppie or something but I really did have some hesitation about going through with it this year.

Verdict: probably the last year we'll be doing the Heritage Turkey thing for awhile. While it's a great experience and I don't regret doing it because the turkey is literally the center of the Thanksgiving experience, the price has risen to the point where I'm not sure it's worth the extravagance. For a fraction of the cost we could get a fresh or organic bird and I'm starting to think that what we do with the bird is more important than what the bird is.

Was it in the neighborhood of $300? Point taken if you feel you can do stuff to the bird to make a less expensive one more delicious. But nobody should shame you here. This is a BBS with people all over the country and the cost of living in America is weirdly all over the map.
the dark and gritty...Ice Cream Jonsey!
Top

283 including shipping which was 80 by itself. I could have driven to Fresno to pick up but that would have cost $60 in gas with the guzzler I've got now.
Top

In the yard, not too far from the car.
Top

Pinback, we are not laughing at anyone's financial choices here on the internet. I have at least two purchases recently which were objectively dogshit, and what CO did here was for FLAVOR.

Are you against flavor?
the dark and gritty...Ice Cream Jonsey!
Top 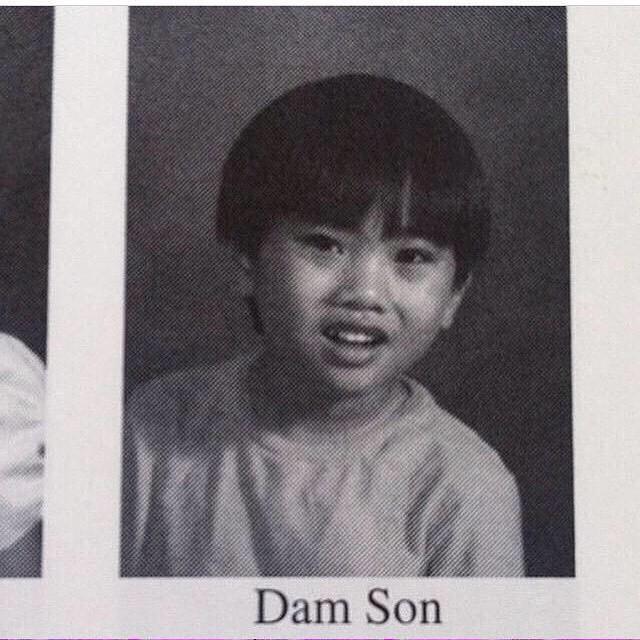 But it least it looks like it you cooked it good!

Wow, I thought I was a madman for spending about 60$ on a raw prime rib roast every Christmas lol
Top

No, that's not mad, it's just what a prime rib roast costs almost anywhere. Mad would be something like a Kobe rib roast which would probably cost a grand or more.
Top

Plus you would need a large pot for all his mistresses, too.
"Jack Flack always escapes." -Davey Osborne
Top

Haha true! If reincarnation is true, coming back as a beef cow in Japan is a good trade if the test scales tip to the less than human value.
Top
Post Reply
55 posts