Here's a thread for the WRX I got.

Here's a thread for the WRX I got.

I wasn't going to post about this because people are WEIRD when it comes to getting a different car. In my experience. Yours may be different.

There is always someone, when I have gotten a different car (more on why I am not saying new in a second) who goes OHhHHHHH!!!! YOU GOT A NEW CAR, SURELY YOU CAN HELP ME WITH (some problem of theirs that required money or time or both). It's what I dislike leas--

-- one of the things I like least about humanity. But fuck it, it's a nice picture, it's a nice car and there is a vein of comedy as Ice Cream Jonsey Marvels Over Things New Cars have. 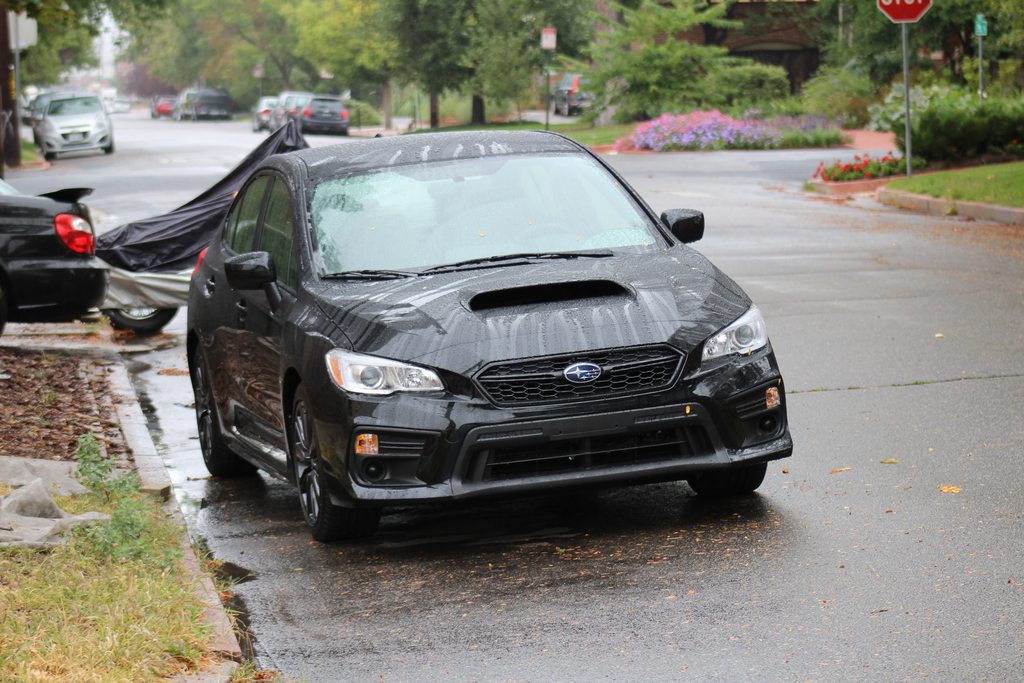 I leave Bluetooth on my phone all the time now because it will connect with my car and start playing music. I have Pandora and I am crafting a station based, initially, off the band Yellowcard. I wonder if there is a term for the anxiety you feel when driving with a passenger when they go, "Ooo, I like this song!" and touch the thumbs up button on your custom station, when you didn't like that song. I'll have to listen to something other than pop punk for it to come up.

The fact that it has multiple monitors on the dash blows my mind. The backup camera makes everything look like Resident Evil 7 gameplay. Which, we know, looks like sewer scope video.

I have needed new shocks and struts in my 2004 WRX for many years. It is so nice to be in this one where things are stable.

It's also like learning how to drive all over again, as this car and the 2004 are both manual. I now drive two cars badly. "Only two?" -- actual thing my wife said.
the dark and gritty...Ice Cream Jonsey!
Top

Nice! While I think car companies go overboard with computerized BS in modern automobiles, I think the monitor(s) thing is a really cool concept. Was it hard for you to get used to trusting them?

And HAHAHA man what is with you guys up there not being able to smoothly drive stick-shift?
Top

It might look better if you took the cellophane off before driving it around.
This signature is limited to 128 characters, or I could have said a few more things. Like, do you know who killed JFK? it was...
Top

Congrats, the WRX has always been a solid car and one quite suited to Colorado.
Top

One question from officer Tdarcos

Jonsey, Colorado is a two-plate state and requires cars to display two plates. Why is there no front plate on this vehicle?
This signature is limited to 128 characters, or I could have said a few more things. Like, do you know who killed JFK? it was...
Top

Probably because it's a new car and he doesn't have the plates yet.

That's my guess. That would probably also be the guess of "100% of everyone in the world except Paul".
Above all else... We shall go on... And continue!
Top

You know, I never even thought of that because I've never had the opportunity to buy a new car. Every time I've bought a car it was in a private party transaction except one time when I financed a used car from a dealer and I transferred the plates from the previous car that was damaged. I even put the tags on the car in the parking lot at the dealer so they never even had to issue a paper plate.

But, since this ties into it, when you purchase a new car is it that the dealer obtains the plates as a courtesy to you or is it that you can't simply go to the DMV and get them, you are required to have the dealer order them?
This signature is limited to 128 characters, or I could have said a few more things. Like, do you know who killed JFK? it was...
Top

That's my guess. That would probably also be the guess of "100% of everyone in the world except Paul".

Last two times I bought cars from dealers, they handled the registration and gave me the plates. I think we need ICJ's help to get to the bottom of this conundrum.
Top

Update! Two nights ago I was woken up by my neighbor. Some fucking asshole broke the rear passenger window on my old WRX, the 2004. I edited my listing on craigslist and set it to a grand. Fuck this. I had been given one street sweeping ticket last month which cost me $50. This thing is killing me. This is the second attempt at someone fucking with it.

I really have to hand it to my neighbors, they chased car thieves away twice.

Anyway, re-listed it on craigslist for a thousand bucks. A very nice guy drove up from Colorado Springs and bought it. It sounded like he knew how to fix cars, he can get five times what he paid for it with some work, I'd imagine and good for him, I hope he does it (though it sounded like he was going to fix it and keep it).

The Black Manta was an awesome car. Goodbye, my friend. We shall always have our crimson spring.
the dark and gritty...Ice Cream Jonsey!
Top

You said someone offered $3000 for it, and you were like, can you believe this guy? Why didn't you sell it to him?

What is going on here?
Above all else... We shall go on... And continue!
Top

Everyone I wrote back -- and believe me, there were many I did not -- never then wrote me back. 90% of all the people on craigslist are bullshitters and time wasters.
the dark and gritty...Ice Cream Jonsey!
Top
Post Reply
11 posts • Page 1 of 1