I watched game 7 between the Denver Nuggets and the San Antonio Spurs. It was a close game, and with the Nuggets up by four, they grabbed a defensive rebound and brought the ball up court. With Popvich screaming for somebody (anybody!) to foul, everybody stood and let the last 20 seconds on the clock run down, am unbelievably dumb mistake that cost them game seven and the series. Nuggets advance to the semi-finals to face Portland. My money's on Portland taking that series -- Lillard is on fire right now.

GSW/HOU kicked off game one in the semi-finals. Everybody is beat up at this point. It was a close game up until the very end. GWS wins game one by four points. This series will go six or seven games.

Boston beat the top seed Bucks in game one in the eastern semis, and Toronto beat Philly. The Bucks/Boston series is at least watchable; the latter, not so much.
"Jack Flack always escapes." -Davey Osborne
Top

Go Nuggers!
Above all else... We shall go on... And continue!
Top

I think the worst possible thing that can happen in a playoff game is to have the outcome decided by a bad (or missed) call.

It's bad enough when the refs miss a single call, but the NBA is now saying that referees missed three calls late in the game. Two of those three missed calls were against Stephen Curry, who was playing with five fouls. All three would have affected the game. When Chris Paul let one of the refs know what he thought about one of the no calls, he got T-'ed and apparently fined $35k for touching a ref. Don't do that, weird beard!

Tonight's game two in the series... and Jesus, this schedule is killing me. 9:30pm (central) tip off means at least midnight and probably later since these teams love to foul and complain about every call.

Also, the 1-0 Celtics take on the Bucks this evening. WHO CAN STOP KYRIE IRVING?*

(*Other than every team in the west coast.)

Things were going well for the Golden State Warriors in game two until Steph Curry reached in and dislocated his finger. In case you weren't sure if it hurt or not, he very clearly yelled "FUCK" into the camera shortly after it happened. Curry left the court and had his finger yanked back into socket and taped up.

Not to be outdone, two minutes later GSW momo Draymond Green raked James Harden across the face, scratching both of his eyeballs and one of his eyelids. 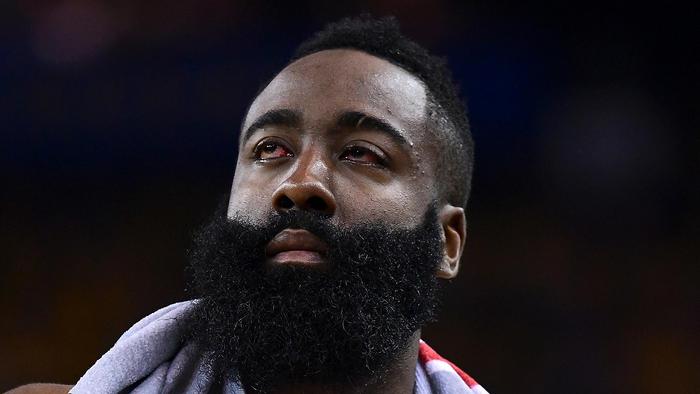 Move over crying Jordan, there's a new meme in town! By the way, that's a picture of Harden from the second quarter. He came back and went back into the game, using eye drops and an ice pack on his eyeballs while on the bench. That's a trooper!

The rest of the game went as well as could be expected with the GSW's top scorer having a dislocated finger and Houston's top scorer with broken eyeballs. GSW went on an 11-2 run in the fourth; Houston closed it to five, but GSW held on and won by seven. Series heads to Houston with GSW up 2-0.

Meanwhile in Portland, the Trailblazers couldn't hang on to the momentum from game one and were down by almost 20 in the third quarter. Denver came back in the fourth, but Portland held on. Series is 1-1 now, and headed to Denver. ICJ! Get us some tickets!
"Jack Flack always escapes." -Davey Osborne
Top

If you want to win in the NBA these days, you have to have at least two superstars firing on all cylinders.

Last night, the Raptors Kawhi Leonard scored 33 points. His team lost by 24. One man can't do it, yo. Raptors drop to 1-2 in Philly with another one there to look forward to.
"Jack Flack always escapes." -Davey Osborne
Top

I'm getting attacked in all the other threads. Could this one, with literal iris-scraping, be a safe haven?
the dark and gritty...Ice Cream Jonsey!
Top

From all of JC's huge NBA fans*, we say, you are welcome in this thread, friend!

In game six of the western semifinals between Golden State and the Houston Rockets, the scales could not have been tipped any further in Houston's favor. The Rockets (down 2-3 in the series) were playing a must-win game at home, and, after straining a calf muscle, the Warriors were playing without Kevin Durant. On top of all that, Stephen Curry, one of the best three point shooters of all time, scored 0 points in the first half. The win was there for Houston to take.

But they didn't. Up by seven in the fourth, Curry began to heat up after scoring ten in the third. Neither Paul not Harden could get a bucket to drop. Like a monsoon, Thompson and Curry began raining threes until they not only tied the Rockets, but moved past them. A desperate attempt in the end to foul Warriors and force them to make free throws didn't work. Warriors close out the Rockets in six with a 118-113 game.

Denver Nuggets/Portland Trailblazers: Series is locked at 3/3, with game 7 on Sunday. Winner faces GSW in the Western conference finals.

Like I said from day one, a Kyrie-led Celtics would be no match for the Bucks, and they weren't. Bucks closed out the series in five. They will be facing the winner of the 76ers/Raptors series, which remains tied at 3/3.
"Jack Flack always escapes." -Davey Osborne
Top

Here's the last four seconds of the Toronto/76ers game.

As expected, the GSW/Portland western conference finals pale in comparison to the Golden State/Houston Rockets series in the semis. CJ McCollum and Damian Lillard, who looked like superstars (and they are) in earlier rounds, have effectively been shutdown by the Warriors' defense.

In game three, with Warriors Cousins, Durant, and now Igoudala all off the court due to injuries, the Trail Blazers went into the half up by 13 and led by as many as 18. But as many teams can tell you, all it takes is one Warrior to get hot to put an end to your evening plans, and when two or three of them start dropping buckets, it's time to invest in a new fishing pole. GSW took the lead late in the third and never gave it back.

If this sounds familiar, it's because the Trail Blazers also went into the half on game two with a substantial lead (15 points), which the Warriors eventually overcame. Portland has to be feeling that they can't possibly beat the Warriors, and they are right.

No big surprises in the east, as the Bucks appear to be making short work of the Raptors. The Bucks, who ended the regular season with the best record (60-22), were up by 28 in game two against Toronto before turning off the afterburners. Tonight's game three sends the series to Toronto, where we'll see if the Bucks can still dominate without home court advantage.

I am really happy for the city of Milwaukee. What a chill place. They deserve to have a team win a championship. (I guess the Packers count for the city, so they have them. And I so support the Brewers that I bought my first MLB hat of a major league team that still exists aside from the Blue Jays when I was out there with Roody.)

The Bucks don't have a chance against the Warriors, do they?

Also, LOL at New Orleans getting the first overall pick. After seeing Buffalo get screwed in the NHL with stupid lottery shit, I am glad the NBA is seeing it backfire.

For what it's worth, the NBA is a million times more interesting to me when the good teams are out of Oakland, Milwaukee, Portland, Toronto and OKC rather than NY, LA and Boston.
the dark and gritty...Ice Cream Jonsey!
Top

Well, both NY and LA will be big in next year's NBA news. With the Lakers not even making it to the playoffs this year, expect lots of "rebuilding" coverage surrounding LeBron. And according to the rumor mill, the deal is all but signed for both Durant and Kyrie Irving (and perhaps others) to go to the Knicks next year.

A Warriors/Bucks finals will be interesting. Both have serious offensive and defensive weapons. It literally could come down to who has more healthy players. That being said, GSW is saying that both Cousins and Durant may be back for the finals so... safe money's on the Warriors, but it won't be a sweep. Maybe 6 games.
"Jack Flack always escapes." -Davey Osborne
Top

The only fun story of the night was Portland's Meyers Leonard, who scored 25 points in the first half and played a total of 40 minutes. Leonard has never scored 25 points in any game he's ever played in (college or NBA), and he didn't play 40 minutes in the entire seven game series against Denver. The crowd was cheering his name, which was fun. Of course they lost, so there's that, but still.

With a 4-0 sweep, GSW has more than a week to rest and recoup before the finals start on 5/30.
"Jack Flack always escapes." -Davey Osborne
Top

My prediction before the finals began was Golden State Warriors would beat the Toronto Raptors in 5 games.

After last night's game, the Raptors are up 3-1 in the series, and headed back home to Toronto for game 5.

If the series ends there, I feel like I should get partial credit for predicting the series would end in 5 games.
"Jack Flack always escapes." -Davey Osborne
Top

Well, it ended in six. Congratulations to the Toronto Raptors for winning it all. We have done such a great job of making America great again that the new NBA champions are the only team based in Canada. Good job, everyone.

With the Raptors up 3-1 for game five, it would have been a storybook ending to put the Warriors away in Toronto. Instead, the Raptors blew a six point lead with 90 seconds left and lost the game by one point. I'm sure they, along with the rest of the country, felt like it was impossible to put GSW away.

Things looked worse for Toronto back in Oracle Arena when Kevin Durant, fresh off his calf injury that had him out for the entire series, walked back on to the court. Durant was on fire in the first quarter until he landed coming down from a jump shot and immediately went to the ground clutching his leg. A ruptured Achilles tendon put Durant not just out of the game, but probably out all of next season.

That left Curry and Thompson, the "Splash Brothers," to carry the load, and with Curry having a bad shooting night, the weight fell on Thompson. Then, late in the fourth, he too went to the ground, clutching his leg. Torn ACL; out of the game, and off the court for anywhere from 6-9 months.

With Cousins and Looney both playing through injuries, there just wasn't enough left of the Warriors to hold off the Raptors this time. With two healthy benches, there's no way the Raptors could have taken the title from the Warriors this year or any year, but sometimes it's less about which team is best and more about which team has more healthy guys standing after playing 100+ games.

Kevin Durant, Klay Thompson, and Raptors' MVP Kawai Leonard are all free agents this summer. Both teams desperately want to keep their teams together for next year (it's amazing that teams would be willing to pay tens of millions of dollars to guys who can't walk), but time will tell. The NBA is a funny place.

This concludes our coverage of the 2018/2019 NBA playoffs. Thanks for another great year, and we'll see you next season. Go Thunder!
"Jack Flack always escapes." -Davey Osborne
Top
Post Reply
36 posts