In this thread, we will be tracking YOUR 4th seed Oklahoma City Thunder as they make their way through the NBA's Western Conference and hopefully reach the NBA finals!
"Jack Flack always escapes." -Davey Osborne
Top

Tonight is game 5 of the Thunder/Jazz series.

Unfortunately as we learned last year, one player on a tear won't get you far in the playoffs. In today's NBA, you need at least two all-stars to get past the first round. Three helps... if they actually play together.

This season, the Thunder made some unbelievable trades and brought both Paul George and Carmelo Anthony to Oklahoma City. Everyone thought this would be the help Westbrook needed to take the team deep into the playoffs, but... it doesn't appear that's the case. The only thing consistent about Melo and George is their inconsistency. When Westbrook shares the ball, which isn't often, Melo and George rarely score. This leads to more 1 on 5 game play, which won't get you far in the league these days.

YOUR Oklahoma City Thunder go into game 5 tonight facing elimination with a 1-3 record against the Jazz. After 70+ games together, it seems unlikely that tonight is the night our big three decide to play as teammates.
"Jack Flack always escapes." -Davey Osborne
Top

After being down by 25 in the third, the Thunder decided they didn't want to lose at home and ultimately swung the game 33 points in one of the greatest comebacks in playoff history. 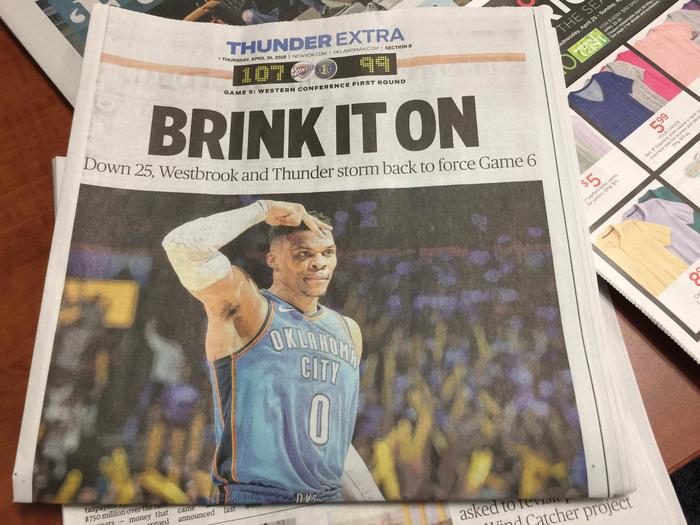 When the Sonics moved to Oklahoma, George W. Bush was President. It might be time to let it go.
"Jack Flack always escapes." -Davey Osborne
Top

His jersey number is zero?

Didn't know they could use placeholders.

The Thunder won it all!

(Just kidding. They got beat by the Jazz, because we have a bunch of overpaid "super"stars that can't seem to play together as a team.)

Both the east (Cavs vs. Celtics) and the west (GSW vs. Houston) went 7 games. The last time that happened was in 1979. To put that in perspective, that was before the NBA had added the three-point shot.

Like everyone predicted before the start of the season, it's the Golden State Warriors vs. the Cleveland Cavaliers in the NBA finals. This is the fourth year in a row that these two teams have met in the finals. In game one of the series, LeBron James scored 51 points and the Cavs still lost in overtime. It's hard to see him scoring 50+ every game, which makes is harder to see them winning one. Barring injury, I see GSW closing out the finals in 5, and that's if all the starters don't show up for one of the games. It's only a radical prediction in the sense that a lot of people have them closing out the series in four games. I predict Cleveland will split the games at home, which also allows GSW to win at home in game five.
"Jack Flack always escapes." -Davey Osborne
Top

I can't believe how useless LeBron's team mates are. What was the theory in trading away Dwyane Wade, by the way? I get that he is not what he once was. But I have to think he would have known to take a fucking shot in the last second rather than dribble out to a three in a tied game.
the dark and gritty...Ice Cream Jonsey!
Top

If you thought LeBron's teammates were useless before, you should see who the Lakers plan to surround him with next season.

Of the four biggest NBA players in the free agency, three -- Kevin Durant, Paul George, and Chris Paul -- all stay put. A rumored text from LeBron to Kevin Durant's personal cell phone suggesting the two of them "join forces in LA" apparently fell on deaf ears.

At 33 years old, LeBron's 4-year/$153m deal could plant him in LA for the remainder of his career. The day after landing LeBron, the Lakers added Lance Stephenson, JaVale McGee, and, Rajon Rondo -- a group of players one analyst referred to as "a big sack of garbage." If LeBron's title run in Cleveland seemed difficult, in the west, and with this supporting cast, it looks impossible. Then again, nobody cares. LeBron's move appears to be more about business than a title. According to ESPN this morning, ticket sales in LA are up 2300% in the past 24 hours, and LeBron, aka LABron, will be well established in Hollywood when his basketball career comes to a close.
"Jack Flack always escapes." -Davey Osborne
Top

I think LeBron could be maybe be an action hero when he's done with basketball? I mean, he won three times. Yeah, guys won more but they had to team up to beat him. Yeah, he also started the thing by going to Miami with Bosh. Whatever, becoming a Laker is a bitch move but I like the guy a lot regardless.
the dark and gritty...Ice Cream Jonsey!
Top

Flopper.
In the yard, not too far from the car.
Top

Is a flopper someone who changes teams in order to earn more money / fame? Don't all the great basketball players end up on the Lakers bench eventually?

THE YANKEES
OF ROUNDBALL
AARDVARK
Top

A flopper is someone who over reacts to any physical contact and falls down (or flops) in order to draw a foul. LeBron James has said on the record that he does not flop. Watch this short compilation video and decide for yourself.

(Spoiler: he does. He is the biggest flopper of all time.)

Oh...that explains why he works so close to Hollywood. The guy's a pretty good actor.

I'm used to big guys with steel blades strapped to their feet actually beating the crap out of each other when stuff like that happens. My bad.

Flack, how do we feel about the Carmelo trade?
the dark and gritty...Ice Cream Jonsey!
Top

I believe I read that getting rid of Melo saved the Thunder around $100 million (his remaining salary plus the luxury tax). For that alone, I think it's a win. The Thunder offense isn't good enough to keep someone as expensive and unproductive as Carmelo. I think signing him probably got George and Westbrook to sign their big 4 and 5 year (respective) contracts, so it was good to have him here, but the fact that everybody groaned each time he came in off the bench was a bad sign.

In return we got two guys I'm not familiar with, a point guard from Atlanta and some guy from the 76'ers. I assume neither one will be starting, but the Thunder desperately needs depth. With Roberson out most of last year, the talent pool dropped off real fast after the starting five. It would be nice for us not to drop 10-20 points every time Westbrook and George came out to take a piss.
"Jack Flack always escapes." -Davey Osborne
Top
Post Reply
17 posts • Page 1 of 1