In this thread, I will be reviewing flavored vodkas. There are only three bottles of flavored vodka in my liquor cabinet, so after I review them maybe I'll move on to other bottles in the cabinet.
"Jack Flack always escapes." -Davey Osborne
Top

I purchased this fine liquor this past weekend while on my way to a bed and breakfast with my wife. I was looking for something sweet (for her), stronger than a wine cooler (for me), and wouldn't need a mixer. UV's Pink Lemonade Flavored Vodka not only checked off each of those boxes, but it was located four steps from the front door, which made it a clear winner.

The $14.99 frosted-glass bottle contained 1.75L (60oz) of flavored 'drank. When we got back to the B&B we tossed the bottle along with a couple of wine glasses in the freezer, and poured ourselves a couple of glasses over ice later that evening while relaxing in the hot tub. The funny thing was, neither of us could remember which flavor I had purchased, and so we took turns guessing. I guessed "strawberry" and my wife guessed "something with citrus." I had a second glass and my wife did not. She is a lightweight.

At 30% (60 proof), the first sip might take your breath away if you aren't expecting it, but it's certainly smooth enough to drink without a mixer. If you wanted to use it in a mixed drink, you could make an adult Cherry Limeade with it, or a Sangria. Pretty much any drink you make with this as a base will be pink, so it might not be a good choice for the bro's.

Recommended if you liked mixing Everclear and Kool-Aid as a teenager, and are too lazy to make Kool-Aid today.
"Jack Flack always escapes." -Davey Osborne
Top

I agree with this review. Although I've only tried the little one shot bottles of this, I can concur that it's smooth enough to slam but strong enough to feel. Also decent are the Citron version of uv or the pink lemonade version of any other vodka.
Top

Plus, since it's still clear, it won't stain your dress if you spill it!
Above all else... We shall go on... And continue!
Top

Every thread. It's every thread now, isn't it?
the dark and gritty...Ice Cream Jonsey!
Top

Best part is pop some gum before you come in and your wife won't know.
Top

Can I play, Flack?

Not horrible, certainly not smooth but the citron flavor isn't too fake tasting. Bet part: $9.99 for a 1.75 in California.

Best recommendation ever from a Total Wine employee. He said that it tastes just like Absolute Citron (about $10 more) but saves some moola, and he was right. Very nice frosted bottle, reminiscent of premium but for 50% less money, yay.
Top

Courtesy of CompleteCocktails.com, here's a list of drinks that include Pink Lemonade Flavored Vodka. All of them are pink, and with names like "Berry Pinktini" and Blushing Bride," none of them really scream "testosterone." The intended audience is more "I'm looking for something with a little kick that I can drink poolside" rather than "my life is sad and I alcohol to make it through the day."

This was the first flavored bottle of vodka to ever enter my home, and, five years later, it's still 1/3 full. I got it as a gag birthday gift several years ago from an old classmate who remembered me as "the guy from college who would drink anything." That reputation was, in my opinion, undeserved. I was broke and hadn't turned 21 yet, so I drank whatever was cheap and available. Nobody with a 401k still shotguns Strawberry Hill flavored bottles of Boone's Farm.

The bottle in my liquor cabinet is 750ml, which, I assure you, is damn near a lifetime supply. To be honest, once you get past the picture of popcorn on the label, it's really not half bad. The flavor is more vanilla than anything, with a strong buttery smell and slight buttery aftertaste. As much of a teetotaler as Paul claims to be, surely the concept of drinkable buttered popcorn combined with the promise of forgetting who he was for an hour or two would have be tempting.

The real question is... what are you going to do with it? Unlike the pink lemonade vodka, a glass of this stuff on ice isn't as nice. The company's website suggests making yourself a "Night at the Movies" by mixing it with Coca-Cola (I suppose naming it "Theater Floor Sludge" didn't have the same appeal.) A slightly better cocktail, the "Caramel Corn Collins," suggests mixing 2oz of the buttery stuff with root beer and a dash of caramel (maybe a caramel schnapps?).

Bottom line: 360 Buttered Popcorn Vodka's is more novelty than anything. Not good for sipping around the house, but great to take with you to a party, especially if you're that guy who orders "frog in a blender" flavored snow cones.
"Jack Flack always escapes." -Davey Osborne
Top

If we are no longer allowed -- nay, encouraged -- to engage in good-natured ribbing here on occasion, then I am not sure this is a community I feel I can continue to engage in.
Above all else... We shall go on... And continue!
Top

The best thing about that bottle of buttered popcorn flavored vodka is that it introduced me to the world of flavored vodkas. Flavored vodkas are great for people like me who are too lazy to mix our own drinks and not sad enough to drink the real stuff straight. Win/win, I say!

The first bottle of flavored vodka I purchased on my own was this, Smirnoff's Fluffed Marshmallow. It's a couple of bucks more than some of the other alternatives, but in my book, it's worth it. Online I'm showing an average price of $19.99 for 1.75L, but YMMV. Like UV's Pink Lemonade, we're looking at 60 proof (30% alcohol) here -- not enough to knock you down, but again... "fluffed marshmallow."

One thing I can say is that this vodka actually smells like marshmallow. Unscrew the lid, take a whiff, and sure enough, it smells just like you've opened a fresh bag of marshmallows. Whether or not that's a good thing is in the nose of the beholder, I suppose. A quick swig from the bottle also leaves a marshmallow taste in the mouth, although some consumers report it tasting more like burnt marshmallows. I like those too.

When I saw this sitting in the liquor store I had ostensibly the same thought that everyone else has: "that might be good mixed with hot chocolate." Guess what? It IS! Assuming you like (a) hot chocolate with marshmallows, and (b) getting drunk, this is a great mix that would go great at any winter family gathering you wish would end sooner.

The only problem with marshmallow flavored vodka is its versatility. It goes great with chocolate liquors, but I can't think of much else. There just aren't a lot of mixed drinks that benefit from "more marshmallow flavor."

Recommended to people who like their drinks sweet, and their hot cocoa sweeter.
"Jack Flack always escapes." -Davey Osborne
Top

If we are no longer allowed -- nay, encouraged -- to engage in good-natured ribbing here on occasion, then I am not sure this is a community I feel I can continue to engage in.

Late last night I had planned on kicking back with another iced glass of frosted marshmallow and discovered that, apparently, I had enjoyed more of it than I had recalled when writing my last review. When I reached back into the liquor cabinet, I spied an unopened bottle of... something. It turned out to be a brand new bottle of Smirnoff Iced Cake Vodka.

They say you shouldn't go grocery shopping when you're hungry, and, having no memory of purchasing this bottle, all I can say is, don't go alcohol shopping when you're hungry, either. That's all I can figure. It's unlikely that I went into the liquor store looking for vodka and found "iced cake," and more likely that I went into the liquor store while hungry, saw the picture of cake on the side of this bottle, and walked out with it.

Like the others, we're still in 30%/60 proof territory here. With the cap off, the vodka has a strong smell of vanilla cake -- and not just the cake, but the icing. Even if I hadn't read the label, I feel like I would recognize the smell.

And, no false advertising here -- a swig from the bottle tastes like liquefied cake mixed with vodka (every teenager's dream). The only problem with using it as a mixer as it comes off as super sweet. I did however find a recipe involving coffee and a dash of milk. I'm brewing a pot now, and will let you know how it was tomorrow.

Unless there's another bottle hiding in the back somewhere, this is the last flavored vodka in our liquor cabinet. There's some banana rum there though that gets some love and might get a review. 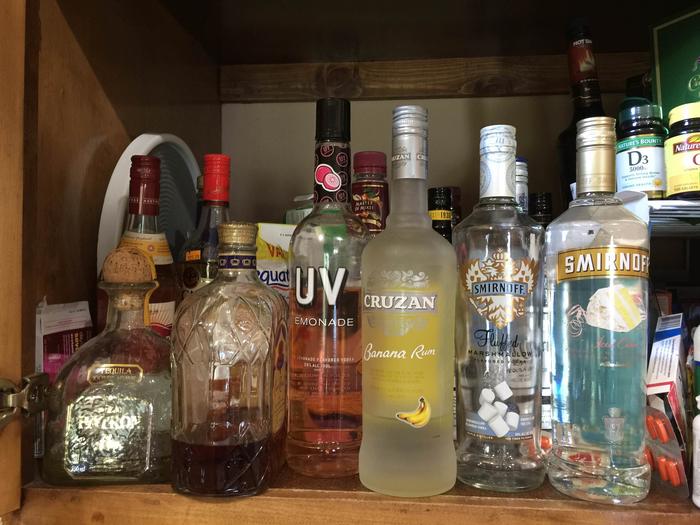 The one and only flavored vodka I ever had....that's at least a whole cocktail, not just a swig from a bottle or a taste from someone else's glass, was chocolate vodka. A dessert drink, very sweet and vaguely repulsive. It was like drinking Willie Wonka's blood. No, give me plain spirits and a glass with an ice cube or two, keep the sweet stuff for......I dunno, just not me.

"You're drinking red wine and eating Twinkies?"
"It says right here it's a desert wine."
- Some chick flick
"I said, ooh, I'm blinded by the lights
No, I can't sleep until I feel your touch."
-The Weeknd, Blinding Lights
Top

That's dessert, not desert. All this talk about strange flavored booze is making me dizzy and wanna hurl...
"I said, ooh, I'm blinded by the lights
No, I can't sleep until I feel your touch."
-The Weeknd, Blinding Lights
Top

All right. Well, that's how these things goes, right?

ChaingGangGuy? Ever tasted a vodka that was flavoured?
the dark and gritty...Ice Cream Jonsey!
Top

I thought a lighthearted discussion of alcoholic beverages might bring us all back together.

I have enjoyed many flavored vodkas. Even the "cupcake"-type variety which so many scoff at.

I am pro-flavored vodka, and I look forward to enjoying the rest of Flack's adventure through this exciting subcategory of liquor.

For those who would scoff at this most underrated style, let me just remind you that gin, which I'm sure none of the scoffers would cast a sideways glance at, is essentially herb-flavored vodka. The original flavored vodka. Are you that much better, gin-drinker, than someone who prefers the essence of pineapple or mango to juniper berry?

I'm not, no. I don't know if I ever flat out said it here, but I put crap in drinks all the time. The more it tastes like Kool-Aid the better it is for me.

But I gotta know if ChainGangGuy has ever had a flavored vodka or if that godawful bottle of Mad Dog is the extent of it.
the dark and gritty...Ice Cream Jonsey!
Top
Post Reply
36 posts