Michael Laemle is a ten-year-old boy with some issues. Despite his parents' squeaky clean appearance, Michael is convinced they're up to no good, especially when they attempt to force feed him each night at the dinner table. Michael has developed a fear of the dark, and is plagued by horrible nightmares. Things are worse at school; Michael has trouble following his teacher's instructions, and has appeared on the counselor's radar for his disturbing drawings in class.

For much of the film's brief (81 minute) runtime, it isn't clear whether Michael is imagining things, or if his parents are really awful people. (And by awful people, I mean murderers and cannibals.) By the third act when people start getting stabbed, you'll discover the truth.

Somewhere between a horror film and a black comedy, Parents had a budget of $3 million and made less than a third of that at the box office. Starring Randy Quaid and Mary Beth Hurt as Michael's parents. 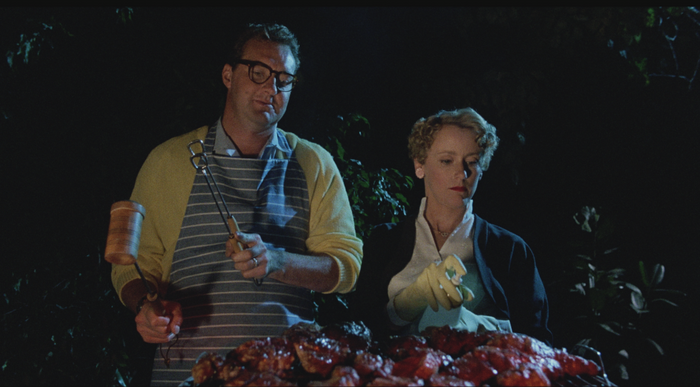 Is it any good though?
Top

I enjoyed it but.. yeah
Top

Critics didn't think so. Ebert gave it two stars, which was higher than most other film critics at the time. The film got low scores for not sticking to one thing (is it a comedy? is it a horror film?) and never "going there" when it should by not exploiting the jokes or going gory with the horror. There's not a single character that comes off as likeable; even Michael, the protagonist, is awkward and a little creepy. In the end Parents was an interesting concept that could have been executed a little better. I enjoyed it for what it was, but it's hard not to see what it could have been. Worth watching once.
"Jack Flack always escapes." -Davey Osborne
Top

Flack's description intrigued me enough that I decided to watch Parents this evening. Everything he said is correct: it is difficult to pin it into a specific genre (black comedy? Horror? Surrealism? Psychological thriller?) and whatever it does, the execution is a bit flat, perhaps even bland. But it is a pretty cool ride: a lot of interesting camera work, (I think) forced perspective, and it does leave you with an uneasy feeling even after the credits drop.

His advice is sound: give it a watch, maybe with friends, because it is a bit of a trip.
This has been a...
RETROROMPER CLASSIC TM
Top

Jesus, there's so many "movies" available these days. Why bother even reviewing them?
Top