Roody_Yogurt wrote:You guys know that this guy's next documentary is supposed to be about text games, right?

I never did the BBS thing myself other than sitting at a friend's house and watching him catch up on messages before heading on to downloading C64 games, but I'd like to see it, too.

If I buy the BBS DVD can I get on the text adventure one?
the dark and gritty...Ice Cream Jonsey!
Top

Everyone is waiting on a seeder. I will be a seeder once we find an initial seeder.
Good point Bobby!
Top

Will you rip your episodes and torrent them? I'm looking at 16 days unless another seeder shows up.
Good point Bobby!
Top

I looooove to seed!
Top

There's a working torrent for the people who haven't bought it already.
Good point Bobby!
Top 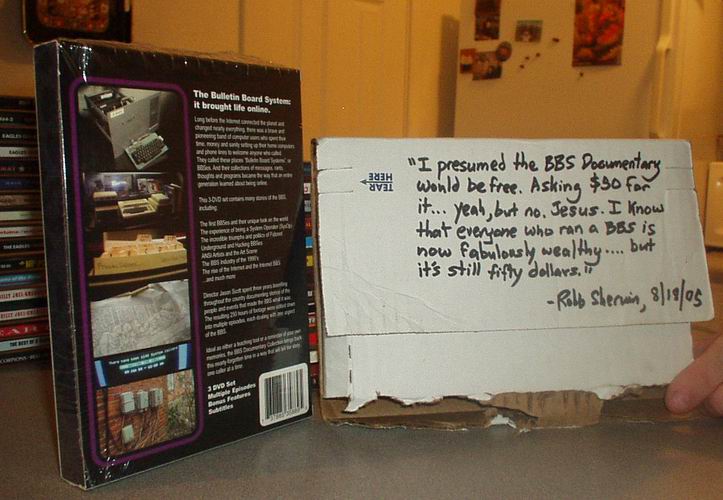 Speaking of which, what I had viewed of it inspires a question in me. Robb, you don't own a 'Hacker Inside' shirt, do you?
Good point Bobby!
Top


The plusses are from a bounding cat.
the dark and gritty...Ice Cream Jonsey!
Top

1) Yes, I did get a free copy of the BBS Documentary from Jason. The production values on the box are fabulous. It's easily one of the best looking boxes in my DVD collection... of course if he, or anyone else, had simply put their discs in a paper slip sheet it would have trumped the excreable release of "Saw."

3) I bought the cheapest DVD Player in the world after my old Apex one died. And I had a disc inside the old Apex one that I had to get out so when I say it "died," well, I mean like in a teen slasher sense. The ONLY way to get the disc out of there was to rip and hack apart the Apex like I was some sort of 2005 version of Jack the Ripper. Anyway, the Cyberhome POS 3000 that I got to replace it didn't come with a remote control, so I had to get it sent to me over the Internet. I'm eagerly awaiting its arrival so I can watch the documentary. It's funny, if you put it up against what is on TV normally the BBS Documentary wins like every single time no matter the time slot. "Yes, I'd rather watch something about bulletin boards than everything on all networks." I hope he can get his documentary broadcast on cable at some point if that's what he wants to do.

4) From the perspective of getting things in the mail from people who come across this site, I am really hoping that I don't get a box of maimed blue jays from the one fan of the Brewers who also traced us back a few months ago, now that the Brewers look to finish above .500.
the dark and gritty...Ice Cream Jonsey!
Top

I'm glad you like the package, Robb. After you watch the episodes, I hope my $50 price will seem a little more realistic.

By the way, I got your address by buying Necrotic Drift.
Top

Jason Scott is great! He apparently hosts textfiles.com which I discovered a little earlier at the leftover crack forums. I hope Jason sticks around!
Good point Bobby!
Top

As soon as my documentary is produced by the millions with the mechanism sold to dozens of worldwide vendors, and sold through hundreds of chain stores, I promise I'll shave off a couple of nickels for you.

I get this complaint occasionally, and my response is "The documentary is fine wine being sold at $80 a bottle, and it's not a can of soda being sold for $0.80 at the local 7-11."

What can I say, I believe in the thing.

I expect the price to drop over time, of course, and there have been negotiations with a number of vendors to sell it, and when they buy in 1000-box units, of course they'll get significant savings and pass them on.
Top

Plenty of companies are doing just fine selling (legal) movies on DVD-Rs. Nowadays you can easily pick up 100 blank DVDs for thirty bucks.

I assume the $50 doesn't include shipping, so I won't mention that.

Of course, there's the time involved. Let's say you've got a nice $40 NEC 16x burner and are using good Ritek 8x media and verify each burn. That's maybe 30 minutes per burn. (And it's not like you can't do something else with your time while it's burning!) Let's value your time - for basically clicking the big red button in Nero - at a whopping $3.50.

(This is assuming that you didn't pay a production house to stamp out silver DVDs for you. That would be quite a mistake on something with such a low production run.)

That's still $45 in pure profit from the actual production of the product. It sounds like you want just a few sales of this to cover your camera, computer, video editing software (which can all re-used for future projects), and of course legitimate costs like plane fare if you actually flew somewhere to interview someone.

Then there's the fact that even die-hard BBS fans (like me - from the 300 baud days) are going to be difficult to please if their own little world isn't covered. I mostly stayed in the Atari BBSs, which meant that ATASCII would be a topic for a segment - the "Macromedia Flash" of its day. I'm not particularly interested in "door" games or multiuser chat aspects of BBSing, those are all past the BBS era's prime IMHO.

Hey, I'm glad you're able to sell a few. But geez, at $50, you're just pissing people off. Back in the BBS days, (virtually) no one was asking others to foot the cost of their monthly phone bill, expensive computer and modem, BBS software, etc. You should be able to cut your profit margin back just a wee bit.

I see what you did there, but this is not realistic. Let me give you an example. Each ND package ran me $4.47 from Mixonic. And that was a CD (not a DVD, much less 3 DVDs) a simple, black DVD case (not a fold-out one that holds 3, like with Jason's), a printed insert slip (not printed directly on the DVD case) and it did not come with a DVD "case"/binder/whatever it's called... you know what I mean. The thing Bad Religion discs come in.

There is NO WAY he puts that package out for 1.04 a frigging disc no matter how insanely you massage the numbers, you MADMAN.

Of course, there's the time involved. Let's say you've got a nice $40 NEC 16x burner and are using good Ritek 8x media and verify each burn. That's maybe 30 minutes per burn. (And it's not like you can't do something else with your time while it's burning!) Let's value your time - for basically clicking the big red button in Nero - at a whopping $3.50.

You're insane. Nobody would do it by themselves. You don't understand because you've never made anything.

That's still $45 in pure profit from the actual production of the product.

Yeah, but in this imaginary world people settle up with custard pies and unicorn rides. so the money is immaterial.

Then there's the fact that even die-hard BBS fans (like me - from the 300 baud days) are going to be difficult to please if their own little world isn't covered.

You know you can grab it through a torrent, right? Jesus.

I mostly stayed in the Atari BBSs, which meant that ATASCII would be a topic for a segment - the "Macromedia Flash" of its day. I'm not particularly interested in "door" games or multiuser chat aspects of BBSing, those are all past the BBS era's prime IMHO.

Unlike my DVD player, yours presumably has a remote that allows you to access various chapters. On the THREE freaking discs he's included.

Why are you being like this? This is why I can never take you anywhere. "I don't like door games" -- what's wrong with you? Someone who was gorging himself on door games like LoRD and Pimpwars on my old BBS so much that he put them up on his phpBB portal in 2005 all of a sudden "doesn't like door games." Maybe Jason put a section in his documentary on COCK, that seems to be more your style all of a sudden.

This is the fundamental difference between you and me. I see a guy who did a documentary on what was and is my favorite hobby and I'm all, "Cool." You, on the other hand, have your nose wrinkled and are crying about how he isn't doing it right. I hope he didn't do anything about ATASCII because IT SUCKED.


Back in the BBS days, (virtually) no one was asking others to foot the cost of their monthly phone bill, expensive computer and modem, BBS software, etc. You should be able to cut your profit margin back just a wee bit.

My memory is that most everyone in Rochester was crying for money, because they were too broke or stupid to keep their systems up without BBS welfare.
the dark and gritty...Ice Cream Jonsey!
Top

At any rate, it seems like the snail convoy from Cyberhome made it, so I will be watching my first episode tonight. Double-yew OH OH TEE!
the dark and gritty...Ice Cream Jonsey!
Top

Well, thanks for the endorsement, Robb. I was going to mention some of this in a response, but I like your style better, and it's your pub, anyway.

I should like to add that the three discs are in fact dual-layer, and so that breaks the economics a little more, since dual-layer DVDs are expensive, and to fit this data on regular ones means probably 5 instead of 3. (I assume slop across the discs, but I'd have to double check.)

4,000 people have downloaded episodes without giving me a nickel, so there's lots of opportunity to enjoy the work without sending me my highway robbery fee.

For good or bad, I've dealt with this argument before, and I know the standard steps in the back and forth.

I will not pretend I am not making a profit on it. On the other hand, it took 4 years of my life. Real years, not fake "it was in the garage last October when I checked" years. $50 it currently is. It was hard to justify this work to my family. Money coming is now justifying it.

I am working on another documentary now, and since I'm shooting it in high-definition, I am spending money there as well. This helps fund that one.

Finally, I can't really have much to say about his argument of "Put your work into a shitbox, it does the job." I decided that when I was going to put the packaging together, it was going to rule, totally burn the barn, completely rock the engine off its mounts. I spent a lot of time with the duplication company making sure it looked good, and that the whole package was in good shape.

There are also technical issues why a "burn it at home special" aren't the way to go. But I'll only go into that if it's warranted/requested.