So a lot of the guys at work figured out that if they get mandatory sick pay from our employer AND the state pays them a $600+ weekly amount they can get almost double their pay without coming in and working. So a lot of guys are self quarantining. Funny cause there's hardy any puerto ricans left at work...why do you suppose that is?

AArdvark wrote: ↑
Fri May 15, 2020 4:20 pm
So a lot of the guys at work figured out that if they get mandatory sick pay from our employer AND the state pays them a $600+ weekly amount they can get almost double their pay without coming in and working. So a lot of guys are self quarantining. Funny cause there's hardy any puerto ricans left at work...why do you suppose that is?

Because all the hot ‘rican chicks that work there are all already married?
Top

Mask enforcement hit late last Saturday. Went to Walmart (for the 2nd time since this mania started. I try to avoid Walmart at all costs) and everyone was wearing a mask but me and perhaps a couple others. There was no warning sign and the Walmart checkin lady didn't say anything. People just buying up the recent media hype. 2 cops that walked by me didn't say anything. Then I go over to Target next door and there is a yellow sign saying "No one permitted in without a face mask". So, I went home.

By Monday, this had crept into most gas stations and local grocery stores. Now, I have expressed before that I think a lot of shit with this is bullshit.. but I have never said it's a hoax. The masks thing always seemed stupid to me in a rural area. It's not as if I hop on a subway every day to go somewhere. Also, unless you are wearing a full tyrex suit with enclosed googles AND a P-95 or a full rubber mask with carts, you are still "at risk". If you don't wash your hands, you always "put people at risk". Aerosol and surface contact is what it is. The media has overblown the whole thing in stupid ways on all sides. The president and the local government in my state and others ordered stupid shit.

HOWEVER: When the sign says you have to wear a mask to go in, AND the sign is made CLEAR by the business, not the government or the news.. you OBEY it, right? Hahaha man. The people I saw at the cheaper grocery store totally met the stereo-type. Trashy, 1/4 tattoo'd Caucasian family. WHOLE family from kids to grandma saying fuck it to the sign.

I hate that old song called "Signs" that the Black Crows (bleah) covered. Like no you fucking hippy, trespassers will be shot on sight. Turn the fuck around. If the store plainly says you can't go in to buy beer and porkchops without something strapped to your face, then you can't do it. In Japan there are still some business with "no foreigners" signs out front. I'm not going to storm in and demand they serve me or try to start a protest.. I'm just not going to go in.

On the other end of this, I am still laughing to myself at people wearing masks standing around in parking lots, walking around, DRIVING lol. I have been pulling up, stepping out, whipping on the mask, and after I've gone in and done my shopping I whip that thing off as soon as I come thru the auto-door so long as no one is up on me. It is summer time after all. Ah man, I miss the public pool and waterpark so bad despite being able to just go to the ocean unless the governor does something else over-reaching. Not out at the coast this week because probably everyone else is. It's kind of like the protesting that had been raging for a while. Interstates and shit shut down that doesn't have jack dick to do with me, my parents, grandparents.. we can go all the way back to my Irish slave great-great grandparents.. but these dumbasses that fuck everything up for everyone somehow are probably going to fuck something else up for me too. It's like when you were in school and if one guy didn't fess up to doing something stupid, the whole class pays. In fact yeah.. it's exactly like that. Systemic things like this really get under my skin.

I got sick with this funk early on (Feb) and was lucky enough to get through it. Same for dad; but it was harder for him. I have been so much sicker before though from flu strands and crazy stomach viruses and keep questioning all of this. Also still opting for the P-95 mask. Had a couple for working with Bondo before all this mess started and I've yet to have anyone tell me a good reason for why it doesn't "work" aside from a doctor (and local arcade friend of mine) telling me "people don't want you wearing that because of the valve.. but.. yeah for appearances." The argument against the p-95 style of mask is that the valve can release some particles when the user exhales. Think about all the people wearing socks and shit on their face and come to your own conclusions on that one.
Top

Heh, most people here are complying, if your stores were really serious then they would post security or at least an employee at the entrance to enforce like thry do here. People get turned away here. We're starting to open a bit, now restaurants can have outside seating like this IHOP near my apartment. Gotta say that eating IHOP in a parking lot in 90° weather doesnt sound like "freedom " to me, sounds like hell. 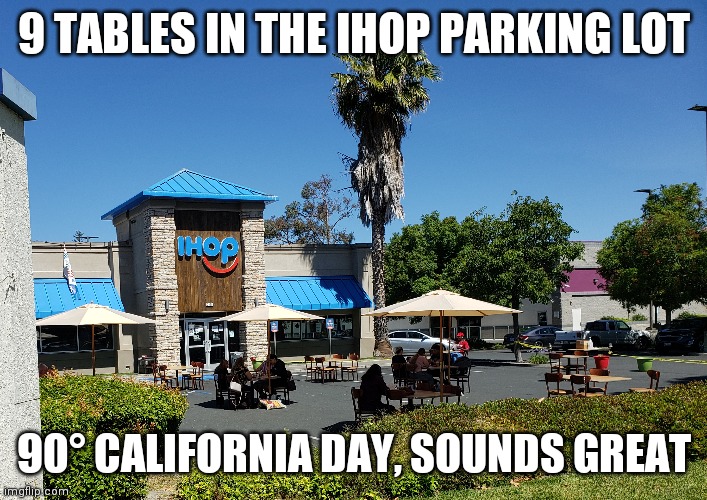 I don't know what the rules are here anymore. Last night we went through a drive-thru and everybody we saw working inside the restaurant had their masks down underneath their chins. Why have them on at all? Not wearing one at all could mean you don't own one, or you took it off temporarily or something. Wearing it down past your chin, especially when working with the public, is making the statement that they have a mask, and their employer is making them wear one, but... eh, fuck you.

We went back to the casino one more time. They require temperature checks and masks to enter the casino, but nobody is enforcing wearing a mask once you get in. I'd say 1/3 of the people were either wearing them incorrectly, or not at all. Crowd sizes are growing and I don't think we'll be doing back for a little while. Plus, the slots were really tight (gotta make up 3 months of no income) and table games aren't open yet.

My friend and his wife have been working from home, but their kids, now that everything has opened up, have started going out again. Apparently his daughter got coronavirus a couple of weeks ago. She has since got her mom (my friend's wife) sick. My friend says he expects them all to have it very soon, and he's afraid his parents were exposed, too.
"Jack Flack always escapes." -Davey Osborne
Top

Man, that brings me back to high school. Euchre and blasting tunes like this in "study hall".

You played euchre too? I remember when I was in high school I used to chase a wheel around with a stick.
Last edited by Billy Mays on Fri Jul 03, 2020 5:45 am, edited 1 time in total.
Top

Never heard of this unless youre talking about Clint Eastwood's unhinged rant at a vacant chair, which i did see.
Top

Never heard of this unless youre talking about Clint Eastwood's unhinged rant at a vacant chair, which i did see.

It was a civil war reference, I was calling you old because of euchre, then I changed it to something else which I'm also not entirely happy with but there you go.
Top

Tunes like this included GnR, Aerosmith, Garth Brooks. Also whatever was on WCMF at the time (dont worry billy, only half of the people here know what wcmf is).
Top

It's a classic rock station located in Rochester, NY. Now everyone knows what it is.
Top

Never heard of this unless youre talking about Clint Eastwood's unhinged rant at a vacant chair, which i did see.

It was a civil war reference, I was calling you old because of euchre, then I changed it to something else which I'm also not entirely happy with but there you go.

Oh, i am old, thats not exactly a dig. Would love to learn what empty chair has to do with civil war, sounds interesting. I used to live ten miles from appomattox courthouse so civil war is an interest of mine.

In regards to the shade you threw at a well respected card game, ill have you know that in upstate new York kids play that game. Its actually fun and strategic, you'd like it there are lots of chances to cheat.
Top

By any chance, was it an electric performance?

i didn't know there was a cover, the only one I knew of was by Five Man Electrical Band. Hearing how both bands have, ahem, "connections" to electricity, I guess I can say I'm, shocked.

You may all groan now.

"I said, ooh, I'm blinded by the lights
No, I can't sleep until I feel your touch."
-The Weeknd, Blinding Lights
Top

By any chance, was it an electric performance?

It wasn't. It was from a live album called "Five Man Acoustical Jam". It was literally the opposite of an electric performance.
"Jack Flack always escapes." -Davey Osborne
Top

Casual Observer wrote: ↑
Fri Jul 03, 2020 5:56 am
Would love to learn what empty chair has to do with civil war, sounds interesting.

It was a popular song during the Civil War, started off in the North but took off on both sides. It's pretty obvious: you had a chair, if you died, that chair went vacant. It's what your family gets to see.

It can't be fun and strategic if there are lots of chances to cheat.
Top

Its actually just called "crossboarding" which is only secret communication between partners. Same shit happens with bridge where partners know each others tells. Im sure the games by now have this kind of thing included in what is expected. These games are hundreds of years old, class of '92 at marcus Whitman hs didnt come up with crossboarding. Its like when i waited tables in the '90s, back when POS systems were new and suddenly the entire waitstaff realized that we had figured out that when customers paid cash we could split off certain items and re-use on another check. Now, POS systems require a manager approval to split checks. Point is, if a 200 year old game is cheatable then its been decided its ok because otherwise it would have been changed.
Top

Casual Observer wrote: ↑
Fri Jul 03, 2020 6:58 am
Its actually just called "crossboarding" which is only secret communication between partners.


Oh yeah! I totally forgot about that band.

They sucked too lol
Top

Tesla sucked? Is that the take we're going with for HOT TAKE FRIDAY?
the dark and gritty...Ice Cream Jonsey!
Top
Post Reply
161 posts