US Bank fires an employee for helping some sad sack

US Bank fires an employee for helping some sad sack


A Portland U.S. Bank employee said she was fired after giving $20 of her own money to a customer who was broke and stranded at a gas station on Christmas Eve.

The man she helped called her firing “ridiculous.”

“I was a customer of U.S. Bank, I needed help, and she went above and beyond,” said Marc Eugenio of Clackamas. “I felt so bad. She was the only one helping me.”

Most of the times when companies pull this shit I don't do anything about it because I am an important yet jaded outsider, free from all human concerns. But when I moved to Colorado in 1998 I didn't have a local bank when I got my first (paper) paycheck out here. Across the street from where I worked (good ole StorageTek) was a USBank, so I went over there and opened a checking account with my paycheck.

I guess I should pull all my money out and find some LOCAL CREDIT UNION as that is what people like to do these days. But I have a car loan that is setup to take money out of a checking account each month until it is finished. I guess that's how they get you.
the dark and gritty...Ice Cream Jonsey!
Top

I use CapitalOne online now. They have 4 other accounts of mine so why not? . I used to use GreenDot's Walmart Moneycard for years. Fuck regular banks.

Regular companies will fire people for the weirdest shit. I've never worked for a regular company like that, my boss takes home the company daily free lunch leftovers to give to the folks begging on the intersections on the way home (as if that's what they want), I'm sure he'd be fine if I gave some money to the guy sleeping on the lawn of the officepark with the stolen googlebike and the bag of cans.
Top

I fully support your decision to move away from this bank despite me banking with Whales Far-go. The used to be Wachovia (WalkAllOverYa) which built the most obnoxious building in Winston-Salem NC. 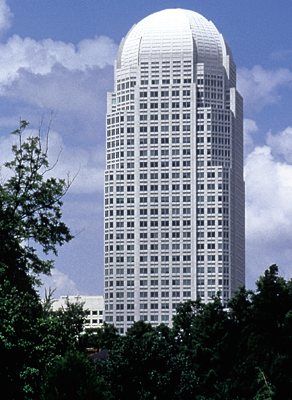 Wachovia (bank)/RJR (cigarettes) already had 2 80s-modern buildings in the same area. The first one, is actually a model for the Empire State Building. The other is a tall, square building with reflective green glass windows.

Then, they build the “dick building” as we call it around here. At least 2 guys died building that stupid dome at the top. And not many years later.. they were bought out by Wells Fargo.

So, I became an inherited customer. My first card issued by WF said I had been a customer since 1983 which is only vaguely true but whatever.

Banks are evil. My mortgage at least is totally local, but I’ve almost paid it off. Still with Whale bank due to no real problems. They actually sorted out a problem for me twice.

Citibank Double Cash Mastercard offers 1% cash back when you purchase and 1% back as you pay. I use it to pay my nursing home bill. That gets me an extra $26 each month in cashback rewards to pay for Starburst and Ritz cheese and crackers.
"I said, ooh, I'm blinded by the lights
No, I can't sleep until I feel your touch."
-The Weeknd, Blinding Lights
Top

I still think there's more to the story than has come out. That being said, companies are lining up to hire this girl. So good for her and good for them.
"Jack Flack always escapes." -Davey Osborne
Top

Flack wrote: ↑
Sat Jan 25, 2020 5:39 pm
I still think there's more to the story than has come out. That being said, companies are lining up to hire this girl. So good for her and good for them.

Yeah I kind of figured “social justice” would sort this one out.
Top

There was an update to this:


U.S. Bank's CEO called her personally and issued an apology and sent KGW this statement.

"Our recent employment decision in Oregon did not reflect who we are as a company. U.S. Bank fell short of our and others’ expectations and we sincerely apologize. Our CEO Andy Cecere has personally spoken with both employees and asked them to rejoin the company. Ms. Gilbert has agreed to return to work next week as a call center supervisor. We have discussed a new position with Ms. James and she is considering it at this time. We are committed to understanding how we can learn from these events and make the right changes so they do not reoccur. We are beginning a re-evaluation immediately of our policies and how they are applied to be certain they are flexible and put the customer first, while remaining consistent with our obligation to safeguard customer assets and ensure the safety of our employees.”

I do want to get my money out of US Bank now. A fuckup like this and the CEO offers them their jobs back and that's it. Why shouldn't that be enough, why wouldn't they be overjoyed at a chance to work at his shit-ass company again? "We fucked up, here's 10 grand and a promotion for, you know, giving shit about people" would be a nice start. I swear every single CEO in the world honestly thinks their employees would come to work for them and put in 40-60 hours if they were no longer paying them a wage.
the dark and gritty...Ice Cream Jonsey!
Top

Some other bank names" Cotibank - Shittybank
Bank of America - Stank of America. Blank of Anemia
"I said, ooh, I'm blinded by the lights
No, I can't sleep until I feel your touch."
-The Weeknd, Blinding Lights
Top

So let me understand this. You spend the evening reading old threads and posting your replies. I do it and you feel the need to COMMENT on it.