When I read this i had to look up Bob Barker. I honestly thought he had already died but he's still kicking at 95.
Top

I'm one and I did appreciate the reference. I would've appreciated it even more if you'd spelled it "pet sematary" like the band (and Stephen King), but I realize you'd probably then have been attacked for not knowing how to spell "cemetery" so it's completely understandable. Maybe we need to work on being less hostile as a community so we can more freely share poorly spelled songs. Sadly, that's probably not going to happen until Billy's done sharing animal videos.
Top

Totally missed the Ramones reference. I thought it was all Stephen King
Top

I mean.. I always liked them but never really got into them like other stuff from the time they were popular. Don't throw rocks at me man!
Top 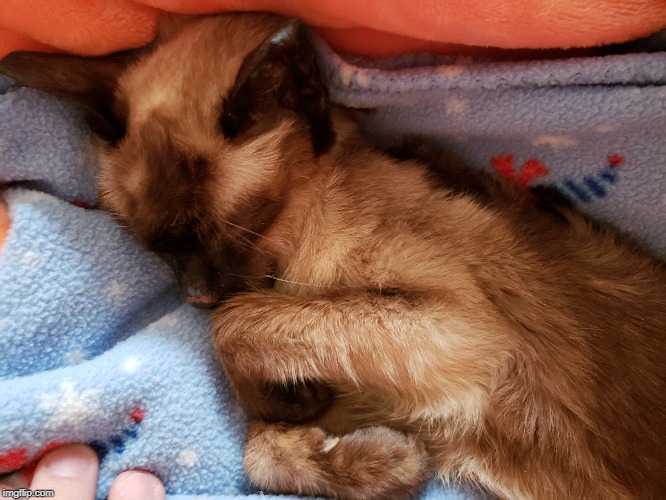 Friday was one of the hardest days I've ever had, we had to finally let our beloved Cleopatra go to sleep after 20 years of love. We don't have kids (probably can't) but this animal was so verbal and had so much personality that she in many ways filled the void. Siamese cats are super verbal and this one also was so intelligent and manipulative that there really seemed to be some kind of person like relationship. Looking back, it's weird to think about the various phases of her life. When we got her from my parents (who used to breed them), she was the runt of the litter and was literally bullied from eating by the other kittens. When we brought her home, she was so glad to be the only one eating that she would growl as she scarfed down food. When young, she came up with her own game of "fetch" with her toys which was a blast. Over the years, she really built a bond with my wife and started really telling us what to do.

At about 10 years old she started to get lazy and stopped really grooming herself, instead relying on us give her mexican showers. About 5 years ago she developed pre-hyperthyroidism and then about 3 years ago she started needing medication for it. The last couple years have been difficult and expensive, with her developing about 4 separate problems: hyperthyroid, kidney disease, heart disease, and arthritis. Towards the end we were pretty sure she started having some dementia and possibly cataracts.

I've never had a cat that made it to this age. The hard thing about these things is that they are like a tiny microcosm of the problems that people end up with at the end but they also can't tell you what's wrong. Cats in particular apparently "hide" problems because i guess in the wild predators with problems are picked on by their peers. We probably could have put her to sleep a few years ago but it really did seem like she was still enjoying spending time with us and we were doing everything possible to mitigate her issues. In the end, she really wasn't able to keep a decent weight and started having problems walking, had some "accidents" and started to whimper whenever we weren't petting or rubbing her so we made the decision to help her move on.

We took her to one of those pet euthanasia places that is set up like a home living room. The vet had one of the most compassionate bedside manners of anyone I've ever met, the setting was serene with lots of plants and a fountain, and the $500 was well spent. I thought it would be traumatic for me to feel her die but it actually was really peaceful. The first shot was a strong painkiller and at her weight it completely knocked her out. The second and third shots were meant to do the trick and did but this little thing had such a will to live that it took twice as long as the vet thought it should. In the end she just stopped breathing and then about 10 minutes later I felt her getting a little cold so I knew it was done.

Now all we have is a goddamn bunny that I hate but I've decided to get that snake I've wanted for years.

Feeling your pain man. Toonses is having difficulty walking and having to make that call keeps getting closer every day.
Top

I'm very sorry for your loss, CO. She seemed like a great cat. You gave her a wonderful life and I'm glad she was able to give you so many good times and memories.
the dark and gritty...Ice Cream Jonsey!
Top